Vodova arena opened its court on Saturday for the second day of Womens’ U20 World Championship hosting Pool B match Bulgaria – Mexico. Mexico got their first victory in a 5-set match with their star Samantha Bricio becoming the first athlete of the tournament to mark 26 points in a single match. Dimo Tonev, Simona Dimitrova, Estanislao Vachino and Alejandra Isiordia commented the game. 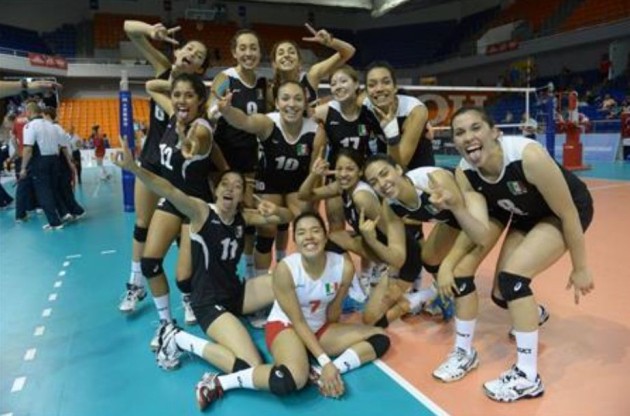 The former national team middleblocker Dimo Tonev, nowadays coach of Women’s Junior, changed his opposite player after the second set, switching Proletka Ivanova with Silvana Chausheva. That was a good move, but Mexico eventually had a very good fourth set.

The tie break was started by a really aggressive Mexico, for a 7-2 steady advantage: a gap which was impossible to solve for the Bulgarians. They tried at their utmost, spiking like hell, but Mexico fantastic start was enough to close the match with Bricio’s block (11-15) and get their first win here in Czech Republic.

Bulgaria coach Dimo Tonev: “Congratulations to the Mexican team. This match was up and down for both of the teams. My team didn’t play very good in the reception. It wasn’t on the good level. It’s impossible to win without a good reception, but I think this championship is very long and our girls have a good preparation for the next matches. So I hope we’ll play well.“

Bulgaria captain Simona Dimitrova: “The decisive difference in this game was the reception. We didn’t have good reception. The concentration in the whole time of the game wasn’t good. This is the main difference compared with the first match against USA.“

Mexico coach Estanislao Vachino: “We could possibly win yesterday game but we played very bad. Today we played not so well too, but this victory is very important for us. It is going to help our mentality for the next matches. I’m very satisfied with the service and with the varied solutions of different game situations today. But we need to block more and we have to train it.“

Mexico captain Alejandra Isiordia: “We are very happy now because yesterday we lost in five sets and today we won. It’s very important for the next match. The team spirit before the next match will be better now. Our performance in the fifth set was of great importance because it decided the whole match.“