The only way to sing a lullaby for her baby at home in Cali, Colombia, carefully nursed by her mother, was to record a short video and relay on YouTube. Danna Escobar, 19-year-old, is the spiking mom of the Colombia team. 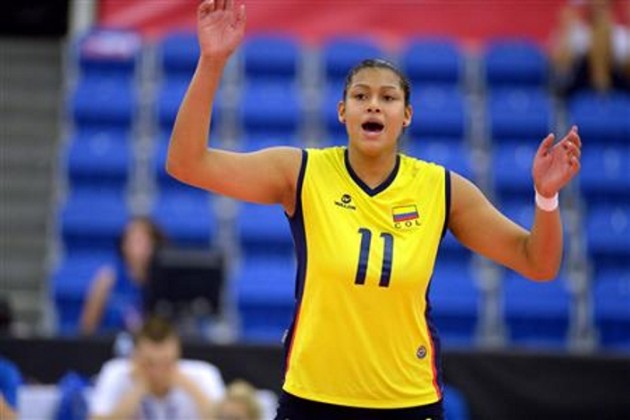 Danna Escobar, 19-year-old, is the spiking mom of the Colombia team. A young mother who was asked to left her little Christopher Murillo, 6-month-old, and fly all over the world, from Colombia to Czech Republic, to follow her sport dream: to be the captain of her national team in a comeback at World Championship after many years.

“It’s hard when you are so far from your baby,” confesses Danna, deeply moved when she talks about him. A child who for sure will inherit all her passion for volleyball and her height (Danna is 192 centimetres tall) as well as from his father, a 2-meter tall volleyball player.

Her recovery after pregnancy was fast. “I felt terrible at the beginning. I gained too many kilos. I was so slow. However, I was back on the court and it went better every day. Christopher Murillo was born last December: I stopped training only for seven months. In February, I was back in the gym to play for my club of Liga del Valle, and then preparing for the World Championship. I had only one month to stay with Christopher. When I’ll be back from Brno, I’m going to see him only one month as I have to join Colombia’s senior team.”

That is why Danna wanted Colombia’s first win (against Thailand) so much: to dedicate it to her beloved son. “It is a gift to my Christopher. Then it’s dedicated to my family, God and all my country.”

WCHJ W: “It was important for us to finish first in Pool C”, says Brazil coach

ROAD TO RIO: Poland and France to...