Though they joined the competition at the last moment – replacing Portugal for this side was admitted to play this year’s FIVB World League – Croatia crowned their campaign in the prelims of the 2013 CEV Volleyball European League – Men by qualifying for the final four scheduled for July 13-14 in Marmaris, Turkey. The side mentored by head coach Igor Simuncic did pocket its ticket on Friday by edging Israel in straight sets to open the last round of play in prelim Pool C. Belarus defeated Turkey in the second match. 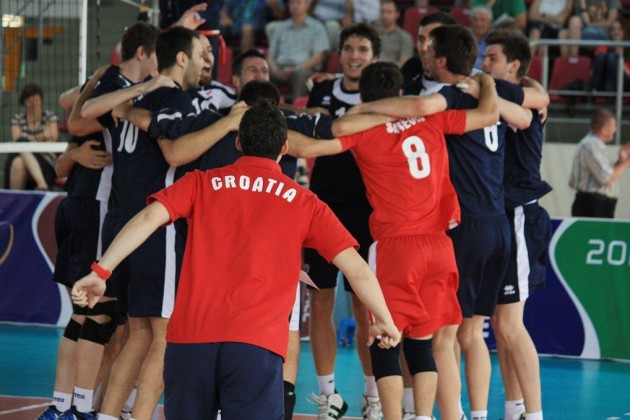 Croatia imposed their pace right from the start of the game (5:1) but Israel could even the score halfway through the opening set paced by Guy Ben Gal, Ariel Katzenelson and Viacheslav Batchkala. The side coached by Zohar Bar Netzer was very close to make it 1:0 in sets but the actions of Croatian opposite Ivan Raic and some good blocks in the end made it 25-23 for the Pool leaders. Israel showed problems in reception right from the start of the second set and could not stand the serve by Matija Sabljak who registered 3 aces at the end of the game. Croatia had it easy in the third set and in the end could celebrate their qualification for the final four.

“As we embarked on this adventure we could never imagine we would finish first in the group” head coach Igor Simuncic said. “Of course we did hope for a good result but we knew that our team is still very young. However, my guys really wanted to win and make it to the final. They knew that this could depend on the result of our game with Israel so they started rather nervous. The first set was the real key to determine the outcome of the game. If we had lost it, things would have been much more difficult for us. We wanted to avoid this scenario and could succeed. After the first set was cashed, everything went easy for us.”

“I am very disappointed, for we lost this game especially because Croatia showed a winning attitude. Many things worked well in the first set but in the end we could not bring it home. We started making mistakes in reception and the quality of our play simply collapsed” says Israeli mentor Zohar Bar Netzer.

In the second match of the day – though the race for the final four was over – Belarus downed Turkey in three straight sets (21-13, 21-19, and 24-22). Though reinforced with some players who had joined the group after completion of the Mediterranean Games in Mersin, the Turks could not stop the home heroes. Pavel Audochanka and Siarhei Antanovich were the leaders for Belarus while the guests from Turkey showed problems in reception and could not score with their middle blockers. Audochanka scored two aces to close the second set and this player – together with Antanovich and Oleg Mikanovich – performed good enough to wrap it up in straight sets.

Korea has their Ngapeth: STUNNING save from...