Current vice champion of Slovakia, VK Chemes Humenne, will base their next season on Polish players. Bartosz Kaczmarek, former libero of Trefl Gdańsk, will join Mikołaj Sarnecki and Mateusz Leszczawski in the club. 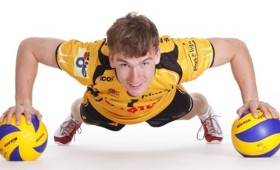 Last year, two Polish players had defended the colors of Chemes Humenne – Mikołaj Sarnecki and Marcin Kryś. After the end of the season, the second one left the team and returned to the homeland to play in Cuprum Lubin.

His place was taken by another Polish libero – Bartosz Kaczmarek – from Trefl Gdańsk . Previously, the team from Slovakia tied the setter Mateusz Leszczawski.

For Kaczmarek this is a big step forward. A young, 22-year-old did not have many opportunities to show up in the team from Gdańsk. In the Slovak league he will be able to develop and show his potential. Kaczmarek has no regrets about the decision to choose a team from Slovakia.

“I do not regret the decision to come to Slovakia. I needed stability and games, and I found them here,” Kaczmarek summed up shortly.

Beside domestic competition, VK Chemes Humenne will play next season in the Central European League MEVZA and in the Challenge Cup.

Simon: “I got tired of problems in Cuba” (VIDEO)