CAN M: Canada jumped in rankings after World League performance

The Canadian men’s national team’s exceptional performance in the 2013 FIVB World League has resulted in a seven place gain in the FIVB World Rankings, moving the team up to No. 11 from No. 18. 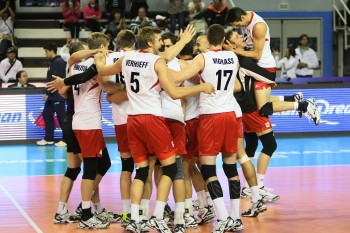 Canada, whose previous best finish in the World League was seventh in 1992, pulled off one of the biggest wins in their history by beating 2013 FIVB World League champions and world No. 2 Russia for the first time ever in a five set thriller on July 19.

Canada also joins Korea (2008) as the only team in the last 15 years to come back from two sets down to beat Russia in the World League.

While Russia recovered from the loss to win this year’s World League, the team is still ranked No. 2 in the world after Brazil – despite defeating Brazil in the gold-medal match 3-0.

Like Russia, the top five teams in the world did not see their FIVB World Rankings change. Brazil remains No. 1, followed by Russia, Italy, Poland and the USA. Cuba, however, ties the USA in No. 5.

No. 7, Serbia kept their ranking, while Argentina swaps places with Bulgaria to advance to No. 8. Germany wraps up the top 10.

PANAC W: Teams are ready for the...