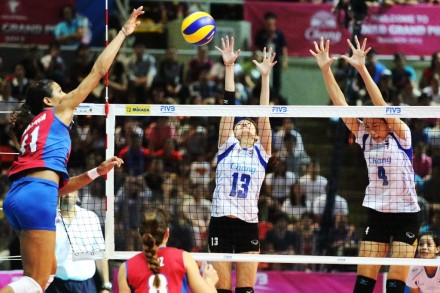 Thailand, FIVB world No.12 and an incredible fourth place at the last year’s Grand Prix, fielded an impressive line-up which included powerful attacker Onuma Sittirak, Wilavan Apinyapong and home crowd favouite Pleumjit Thinkaow, while talented Karina Ocasio spearheaded the Puerto Rico’s explosive attacks. The Puerto Ricans got off to a convincing start, with the 192cm-tall Ocasio using her height advantage to attack aggressively at the net to help the world No.18 take an initial 13-7 lead. The Thai nerves began to fray when the visitors stormed on their mighty attacks. Puerto Rico, which have yet won a match in this year’s Grand Prix, stunned the off-form Thais and silenced their cheering home fans with a sensational 25-18 win in the opening set.

The second set turned out to be a completely one-sided battle when the Thai team put their acts together and fought back bravely, thanks to a splendid offensive combination of Wilavan’s devastating cross-court spikes and Onuma’s powerful jump serves.  Thailand took the comfortable second set 25-7.

After a 1-1 draw, Thailand maintained their poise to continue their impressive form. Malika Kanthong, Wilavan and Onuma took turns penetrating the visitors’ fragile defence with their spectacular attacks to help Thailand lead narrowly 21-19. The Puerto Ricans gradually clawed their ways back to close the margin 22-22. To make short work of the visitors, Thailand remained in devastating form to win the remaining three points for the third-set win 25-22.

Thailand was still in superb form defensively and offensively in the fourth set. Puerto Rico tried to tighten their defense, but their attempts did not work out well. Thailand continued their onslaughts to win the crucial set 25-11, again with ease and the match.

The victory stretched the Thailand’s win-loss record in the World Grand Prix against Puerto Rico to 5-1. Last year, Thailand beat Puerto Rico twice in the Grand Prix consisting of the straight-set win in Pool A in Macao and 3-1 victory in Pool F in Komaki, Japan.

GP: Parisi – ”I’m not happy with the way my team played”