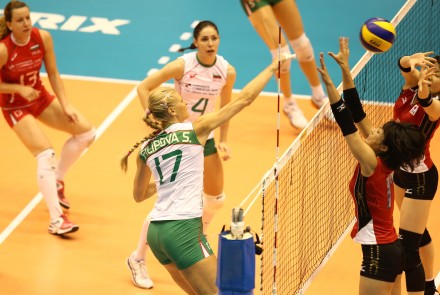 Japan fell to 6-1 and stayed on 17 points, while Bulgaria raised their record to 5-2 and 16 points and greatly improved their chances of reaching the Finals in Sapporo. Japan qualifies automatically for the Finals as hosts.

Japan started out cold and coach Masayoshi Manabe called his players off court after an errant hit by Miyu Nagaoka with the score at 1-5. Bulgaria coach Marcello Abbondanza called a timeout when Japan reeled off three straight points to make the score 19-13 and did the same again when Japan closed to 21-17. Bulgaria earned four set points with a nice crosscourt kill by Elitsa Vasileva and they needed all of them as Japan nearly pulled off a remarkable escape following spikes by Yukiko Ebata and Saori Kimura and a block by Ebata. But Strashimira Filipova sent down a big hit to end the set at 25-23 and put her team 1-0 up.

Bulgaria were two up at the second TTO but a solid block by Kimura on Filipova saw Japan lead for the first time in the match at 17-16. Bulgaria got the jitters again and Japan were up by three points. But Aimi Kawashima served long before two good points by Dobriana Rabadzhieva drew the teams level at 20. Bulgaria got a big break at 21-21 when Rabadzhieva’s serve trickled over the net. Ebata then blew two kills wide and Bulgaria had three set points. Again, they needed them after spikes by Ebata and Kimura made the score 24-23, but Nikolova sent a spike through the Japanese defence to put her team 2-0 up.

Risa Shinnabe came up with four points in the first phase of the third set, and a big thump down the middle saw Japan 8-5 ahead at the first TTO. Rabadzhieva delivered some more power hits and after an ace by Lora Kitipova gave Bulgaria the lead at 22-21, Manabe called a timeout. Two huge blocks by Iwasaka brought Japan their first set point, but they couldn’t convert as the two teams traded points to 29-29. A shot wide handed Bulgaria their fifth matchpoint and Rabadzhieva finally killed off Japan’s challenge.

GP: This was an important win for us – said Filipova

ECJ M: Coaches agree – everything is...