GP: Gido Vermeulen – “Kazakhstan surprised us with their game”

The Netherlands’ coach Gido Vermeulen said Kazakhstan's energy was a surprise early in the match before his team ran out comfortable 3-0 (25-23, 25-14, 25-16) winners. Following the match, the coaches and captains shared their comments at a press conference. 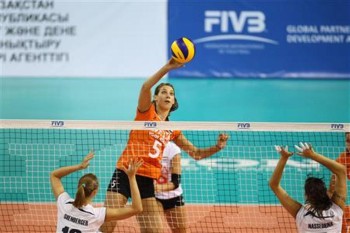 Robin De Kruijf (NED) taps the ball for an attack

Gido Vermeulen, coach of The Netherlands:

“They surprised us with their game. They had a lot of energy in the first set and we had a lot of problems in controlling the game. We did very well in the next set. We had really good serves, and because of our serves we could organise our blockers and played a nice game.”

“In the next sets we were able to give more serves and it worked out very well.“

“It was a strong game and congratulations to the Netherlands team. A good team needs to be built during a long period of time. Some our main players have injuries. We changed some players and probably that was the barrier, the possible reason of our loss – starting from losing seven points in the first set.”

“It is often hard to play with people other than those you are used to. Some players are young and inexperienced but in general we have more dynamic and interesting plays now. There are more combinations. Unfortunately we cannot show them all, every time.”