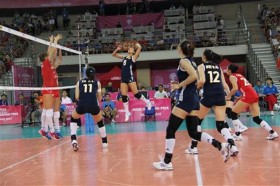 In the beginning of the third set, China was four points behind at 6-2 after Poland changed tactics. The East Europeans continued to dominated and closed out the set 25-16.

The fourth set opened with the teams going point for point, but by the time of the first technical timeout China led 8-6. While Poland fought back to close the gap, China won the match with a 25-23.

Best scorers in the host team were Zeng Chunlei with 18 and Zhu Ting with 13 points. Ewelina Sieczka and Katarzyna Skowronska noted 18 both for Poland.

See the WoV Community profiles of China and Poland, and also profiles of Zeng Chunlei and Ewelina Sieczka.