China coach Lang Ping, who used to coach USA, praised her opponents after the game in which Chinese interrupted USA’s three-year run as champions of the FIVB World Grand Prix. 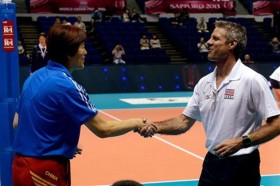 Lang and Kiraly before the match

“I’m pretty sure I know the USA team very well. They have a lot of great players who aren’t at this tournament. They have brought young, talented players and they are doing a great job. Before the match, I told my players we need to get used to their speed. We haven’t played a fast team yet, so we had to make the adjustment on court and learn to make quick transitions. Today, in the second set, I emphasized to the players that they must concentrate on defence. Yesterday, we wasted a lot of game points,” China coach Lang Ping says.

USA coach Karch Kiraly: “We played a nice tournament to earn the right to be here in the Finals. It’s apparent that the teams here are the best in the world and have been able to play at a higher level as the tournament goes on and we haven’t been able to match their improvement. Congratulations to China, they’ve played a great tournament.”

To read more from this competition, click on World Grand Prix 2013.

GP F6: Unbeaten Brazil had no problems with Italy