Slovenia started friendly tournament in Hoče with a surprising victory over the favoured Bulgaria. Home national team won 3-1 (25-22, 23-25, 30-20, 25-21). This game was the first Slovenian game in front of home crowd as part of preparations for EuroVolley. 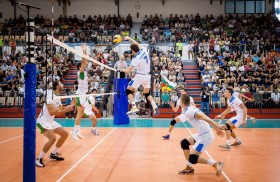 Matevž Kamnik (14), one of the best in Slovenia

There was no doubt who was the favorite ahead of the game, so Bulgarians went into lead with 8-3 and 9-4, but apparently the Slovenians had a bit of stage fright before their crowd in Hoče. When this went down, Slovenians quickly captured Bulgarians. After not much time, they already put themselves ahead (12-11) and the visiting coach had no other choice than to take a time-out. Advantage of the Slovenian team was increased throughout the series of the relies by Mitja Gasparini. Until 22:22 the outcome was settled, but then Gasparini stepped back on the scene with an ace, leading Slovenia to the first set ball and finally hosts won it with excellent service by Matevž Kamnik (25:22).

On the wings of great performance in the first set Slovenians played in the second. Quickly they gained a few points of the advantage at the first technical time-out (8-5). On account of their exceptional service, especially by Nikolay Nikolov, Bulgarians managed to win five consecutive points. All the time hosts had two or three point advantage, but highly motivated Bulgarians showed a little more knowledge, so they ended the second set with 25-23 and tied at 1-1.

In the third set, Camillo Placi’s players quickly went up to 9-5, but Slovenians did not throw in the towel. Thanks to the two blocks of Kamnik, the home team managed to make a series of 4-0, which was also the first tie in the third set (9-9). Tsvetan Sokolov was in the best mood in Bulgaria, but he also made mistakes. Followed by a time-out at the request of domestic coach with help of a re-awakened Gasparini, Slovenia had two point advantage (22:20) and also the first set point (24-23). Todorov has provided the lead for the guests of 25-24, who also had their chances at 26-25 and 27-26. Then young Klemen Čebulj put things into his own hand and took care of the lead of 28-27 and 29-28, also participated in the winning point for 30:28.

The fourth set started even, neither team did not have more than one point of advantage. Slovenia went to the lead of 16:14 in the second technical break. When it was 19:18 Čebulj attacked and, according to all the Bulgarian staff, he missed the last line, but the referees have decided otherwise. Anger of visiting coach did not help Bulgarians and Slovenians put themselves ahead to 20-18. After the following error from the guests, the result on the scoreboard showed 22:19, so everyone in the hall already were thinking about the big victory.

Top scorer in Slovenia was Gasparini with 19 points, whila in Bulgaria it was Sokolov with fantastic 28 points.

SUI M: From Milano to Lugano…