ECH W: Italy on top of group B

Italy secured yet another win at EuroVolley 2013. Zurich was the host of first match of the day and Italy won over France in front of 4100 spectators at Hallenstadion. Carolina Costagrande was the leading scorer with 22 points, followed by Valentina Diouf with 19. Now Italy has six points and has secured the top two positions in group B. France is at the last place without points and but still has theoretical chance to go through the group stage as a third placed team. 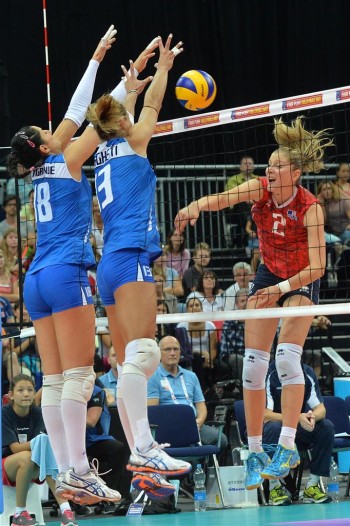 Game was mostly one sided with Italy dominating the flow and tempo of it. First two sets were practically the same. Mencarelli’s team was strong from the opening point and in just 47 minutes got the 2-0 lead (25-16, 25-15).

Then the complacency of Italian players gave chance to French girls who were willing to take it. Alexandra Jupiter entered the game in second set and was the best scorer for French team with 12 points, most in the third set that France won by 25-20 score.

After that, Italy realized that France is not at all an easy opponent and played again with force and will as i two first sets. That resulted in one more convincing performance by Italy who won the fourth and final set 25-16.

To read more news about this competition click on European Championship 2013 W.