National team of Serbia, the current European champion, won its second friendly match against Egypt in preparation for the 28th European Championship 2013, which will take place in Denmark and Poland on September 20-29. 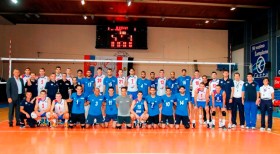 Group photo of Serbians and Egyptians

In the second meeting of the chosen coach Igor Kolaković celebrated 3-0 in sets 25-23, 29-27 and 25-23. Then the coaches Kolaković and Giacobbe, as in the first meeting, agreed that the teams play another two sets in which it was 1:1.

Match between Serbia and Egypt at the “Šumice” gymnasium in Belgrade had watched 200 spectators.

The most effective in Serbian team were Atanasijević with 19 and Lisinac with 14 points, while at the Egyptians, Kotb with 14 and Badawy with one point less were the best.

Rules for dynamic and static stretching