Cannes, France, March 12, 2012. RC CANNES extended this past weekend its domination in domestic competitions by taking France’s national cup for the tenth consecutive year after downing ASPTT MULHOUSE in straight sets in the final match played in Paris. This is also the sixteenth title for the ladies from the Riviera in this competition. 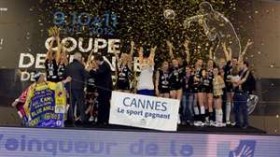 RC CANNES is just unbeatable… at least at home!

Even though ASPTT MULHOUSE displayed a pretty solid performance, still the side captained by Victoria Ravva dominated the scene to wrap it up in straight sets.

RC CANNES has more than 10 days now to prepare for the final four of the 2012 CEV Volleyball Champions League which is scheduled for March 24-25 in Baku and where the French side will play MC-Carnaghi VILLA CORTESE of Italy in the semifinals.