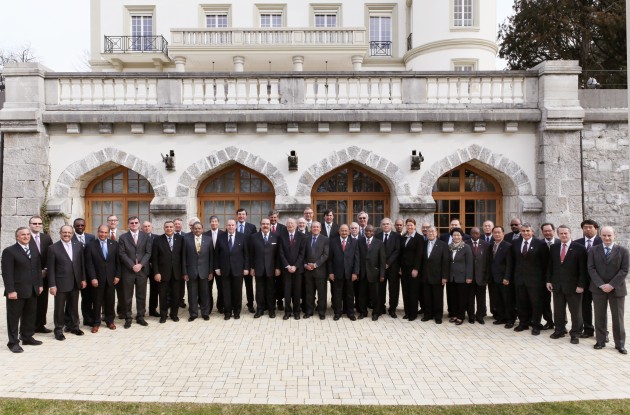 The recommendation reflects the increase in the development of activities across many of the FIVB members and properties and more active national federations, especially in Africa. The process of enlargement will be further studied by the affiliated national federations to determine exact numbers with a working group headed by Legal Commission president Hannu Kananen evaluating all comments before presenting to the Board, who will meet on the eve of the FIVB Congress, to approve the final text before presenting to the FIVB Congress.

“The new development of the FIVB needs a new type of leadership, new creative concepts and new actions. After a transition period, the FIVB will enter into a new era,” FIVB President Jizhong Wei said in his opening address. “A new vision of sustainable development will be elaborated by the Congress based on the reforms already introduced in the previous three years.”

The Board also ratified new FIVB Tribunal Regulations, Disciplinary Regulations (with the Legal Commission to incorporate additional comments made by Board members during the meeting) which replace the old code of conduct, as well as an updated version of the General Regulations. All will be up for approval by the FIVB Congress in September.

The updated regulations included the new Disciplinary Panel, Ethics Panel, Appeals Panel and the FIVB Tribunal which were all part of changes to the FIVB Constitution in an effort to restructure the FIVB’s dispute resolution system based on the decision of the 2010 Congress.

The FIVB Disciplinary Panel replaces the FIVB Disciplinary Commission being responsible for all disciplinary matters provided for in the FIVB Constitution and Regulations. The Ethics Panel will review all ethical issues and make recommendations to the Board of Administration or Congress while the FIVB Tribunal will decide on all financial disputes between players, coaches and clubs as provided for in the FIVB regulations. The Appeals Panel, meanwhile, is empowered to decide on appeals risen from any internal dispute.

The Disciplinary and Appeals Panel and the members of the FIVB Tribunal will be appointed by the Board of Administration and members of the Ethics Panel by the Congress, and made up of a chairman, a vice-chairman and three members with all continental confederations represented.

The Board, which included nine newly elected* Board members from each of the five confederations as observers, also approved the Court for Arbitration for Sport (CAS) as the FIVB’s ultimate dispute resolution body, subject to the approval of the FIVB Congress in September following the recommendation of the 2011 Board of Administration meeting and the signing of an accord between FIVB President Jizhong Wei and CAS Secretary General Matthieu Reeb in January.

Earlier in the day, the Board recognised the remarkable achievements of all the five continental confederations during the year of 2011 whilst also receiving a report from the Press Commission, which highlighted the FIVB’s move towards more online and video communication.

FIVB teams up with IMG, Dentsu and XYZ to market commercial rights