U.S. Women’s National Team setter Carli Lloyd (Bonsall, Calif.) is playing for Yamamay Busto Arsizio of the Italian Serie A1 for the 2011-2012 season. After finishing the Italian Serie A1 regular season with a 19-1 record and 57 points to claim the regular season title, playoff-top-seed Busto Arsizio played a back-and-forth best-of-five championship round series with second-seed MC Carnaghi Villa Cortese. 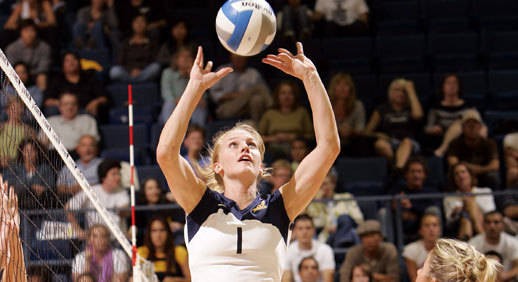 Lloyd scored five her team’s 18 blocks in the match as Busto Arsizio hit for a 44 kill percent and .273 hitting efficiency. However, Busto Arsizio could not keep the momentum in the fourth set with a 25-22, 25-23, 25-18 loss on April 13 to force a deciding fifth match.

Busto Arsizio rallied from a 12-11 deficit in the fifth set to win its second major title in less than a month (won the CEV Cup on March 31). In the clinching match, Lloyd set the squad to a 40 kill percent and a .338 hitting efficiency while adding a kill and block. With the victory, Busto Arsizio captured its first Italian Serie A1 title in its first-ever appearance in the final round.