Toulouse is actively preparing for the next season. Apart from the arrival of the American player Andrew Hein, the majority of players extended the contracts with the club. 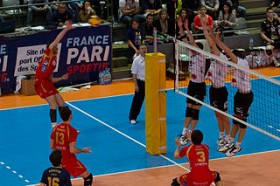 The officials of Toulouse have started preparing the team for the championship from 2012 to 2013. The setter Andre Eloi has already extended the contract for two years. Apart from him, eight players will also stay in the club: Jean-Francois Perez and Nicolas Burel (centers), Alex Damiao and Tchéni Petro (spikers), Thibault Rossard and Gael Vandaele (receivers), Nicolas Rossard (libero) and Dimitri Walgenwitz (setter). Lukas Bauer and Daniel Maciel will leave Toulouse. During the following season Lukas will play in Sète, while Daniel will join Nancy in BM League.