TIJUANA, Mexico, May 2, 2012 – Canada downed Mexico in straight sets (25-17, 25-18, 25-18) to reach the semifinal phase of the NORCECA Women’s Olympic Qualification Tournament where they will meet world No. 9 Dominican Republic next Friday. 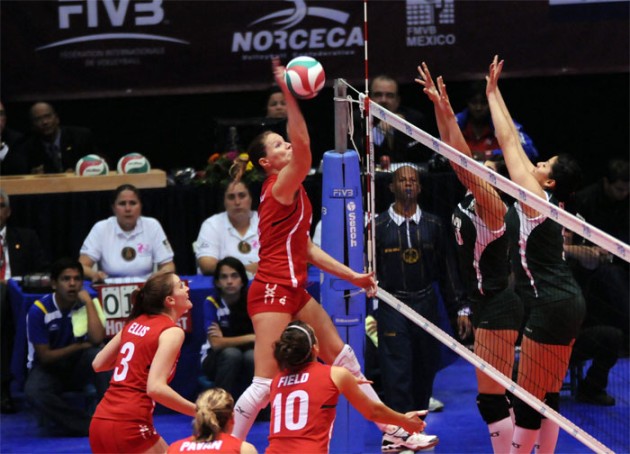 It was a well fought match but the taller Canadians capitalized on their size to out-block their opponents 8-3. Both teams served two aces and made the same total of errors with 18. The Mexicans battled point by point with good defense but couldn’t find ways to stop Canada’s prolific point-producer Sarah Pavan. The lefty Pavan led all the scorers in the match with 21 points, all via attacks, while Marisa Field and Tammy Mahon added 8 and 7 respectively.

Claudia Rios was the best of Mexico with 12 points.

“I am happy with the win today. We were very nervous on playing this quarterfinal, but we are ready to take the next step into the semi finals,” Mahon said.

“We could not make the adjustments and we made mistakes,” Mexico’s Karla Sainz said.

“Canada went out to the court and played well, and capitalized on our mistakes.” “My team played well disciplined today,” Canada’s Coach Arnd Ludwig said. “We were concerned about this match because in the NORCECA tournament we had lost to Mexico. We thought it was going to be tough. Now we have to rest and prepare against Dominican Republic.”

Estanislao Vachino, Coach of Mexico: “It was simple. We had to be tactically accurate with our service level, but we could not find it during the competition. When you are short in height it is complicated. Two weeks ago we had a good level of service, but in this tournament we could not find it. Canada deserved this win.”