TIJUANA, Mexico, May 2, 2012 – Puerto Rico advanced to a semifinal match against Cuba in the NORCECA Women’s Olympic Qualification Tournament after outclassing Costa Rica in straight sets (25-12. 25-12, 25-9) on Wednesday at Tijuana Multi-Sports Gymnasium. 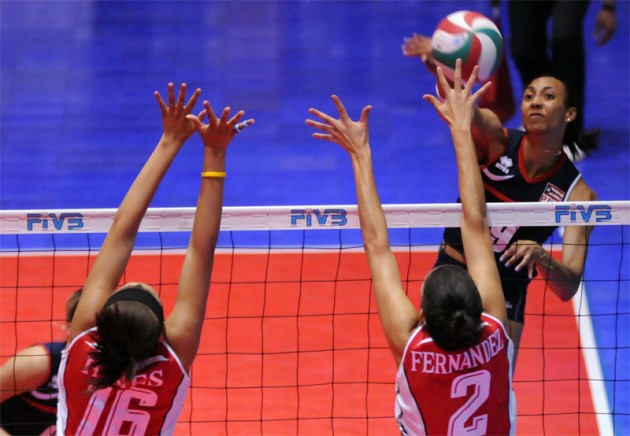 Puerto Rico’s Coach David Aleman used all his players with the exception of middle blocker Jetzabel Del Valle en route to the easy victory in exactly one hour. The gap between the two teams was especially wide in the aces department with the winners scoring 13 aces against only 3 by the losers.

Puerto Rico also out- blocked the opponents 8-4. Sarai Alvarez and Yarimar Rosa were the two best scorers of the winners with 15 and 11 points respectively. Stephanie Enright and Shanon Torregrosa each contributed 8 points.

“It is really refreshing to be on the winning track again after last night loss,” Puerto Rico’s Vilmarie Mojica said.

“It was a team work and now we have to work on reducing the errors in our next match.” “Their serves were strong and well located and we couldn’t find the way to make the adjustments,” Costa Rica’s Verania Willis said.

“I am satisfied with our serves today and I think that will be a key in our next match,” Aleman said.

“They improved the level with the match and it was very difficult for us,” Costa Rica’s Coach Xavier Perales said. “Now we must thing in the next phase for our team and to see who’s going to be the next rival.”

How to perform full knee assessment in...