This weekend starts the final of the Spanish Super League for women, where Valeriano Allés Menorca Volei will challenge Rioja Volley, the champion of the Spanish Cup 2012. 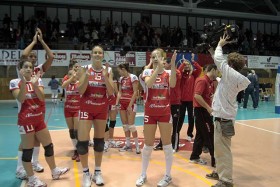 The players of Valeriano Alles will try to take the home advantage in the first two matches that will be played this weekend in Menorca. The girls led by Chema Rodriguez will do their best to take revenge for the defeat in the Spanish Cup. On the other hand, the team of Berdegue Manolo seeks to win the double title this season. The first two matches of the final series will be played On Saturday and Sunday in Ciutadella and will be directed by the referees David Fernandez and Xavier Fernandez.