The last training period prior to the South American Olympic Qualification Tournament that will be hold in Almirante Brown, Argentina with the light blue - white jersey team coached by Javier Weber started with the complete group, once part of the team arrived from USA joining those that stayed in the country to face Cuba, in two friendly international tours. The coaching team will give in the next hours the roster for this competition, the first of the international demanding season that will take place nearby Buenos Aires city. 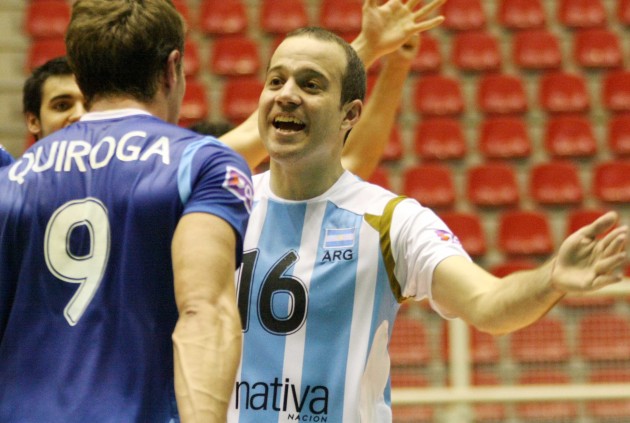 Tuesday May 1st was the last complete free day for this team, that today on Wednesday met at Club Ciudad de Buenos Aires already with Facundo Conte, Rodrigo Quiroga and Alexis González, therefore, the whole team and the coaching staff are all concentrated for this first 2012 competition.

During the morning the team worked with weights and training together while on the afternoon they were divided in two groups, with one helped by the Juniors’ coached by Fabián Muraco.

On Thursday, they will again train double shift, divided at Club Ciudad and Cenard facilities while on Friday they will have free in the morning to work in the afternoon at Almirante Brown Stadium, where the 2011 welcomed very successfully the FIVB Youth’s World Championship.

Both coaching teams, the one that travelled to USA and the one that stayed in the country exchanged data on the performance of all players prior to giving the definitive roster for the Olympic dream.

In USA the team coached by Javier Weber played two matches against the Olympic Champion (3-1 and 3-2 for the host team) while the one that stayed in the country played five matches against Cuba (2 welfare matches and three with close doors for fans and Media).

The competition will take place May 11th – 13th at Almirante Brown City Hall Sport Centre giving an only Olympic place for the Champion between the host country, Colombia, Venezuela and Chile.