Morocco organized a highly graded National Coaches Course in Casablanca, Morocco from April 15 to 18 in the framework of the African Volleyball Confederation “CAVB” development strategy. 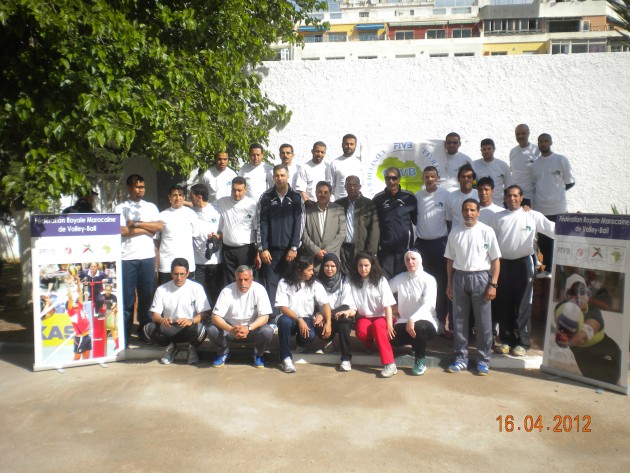 The four day course was conducted by CAVB Instructor Sherif El Shemerly and attended by 24 participants who expressed their gratitude to the instructor and the CAVB during the closing ceremony for the great job in organising the successful event.

Amongst the participants were four female coaches, reflecting the growing interest in the discipline within Morocco by women.
The opening ceremony was attended by two members of the conducting commission in Morocco – general secretary Omar Essouali and the treasure Senhaji Brahim.

The course attracted strong interest from media including Sports Channels Arriadia Sport and RTM. The International Radio of sport “RADIO MARS” covered also the closing ceremony and interviewed the instructor and the participating coaches.

The closing ceremony was attended by the veteran Morocco VB Board member Mrs Thoraya Aarab who is also a CAVB board member and the secretary general Omar Essouali.

“I’m very happy with the outcome of the course especially the performance of the coaches during the practical and theoretical part of the course,” El Shemerly said.

“I send special thanks to the president of the Morocco Board  Hajhouj Kamal and the organizing committee president Mostafa Ahshoush who is also the MVBF technical director and FIVB instructor as they facilitate my job and did their best for the success of the course,” he added.

NORCECA M: USA Too Much for Trinidad & Tobago