Sealy is one of many former Scates’ players that have gone on to become successful coaches. “Andy Banachowski was a player of his and he only went on to coach the women at UCLA for 43 years,” deadpans Kiraly. “The list of his players that have become coaches goes on and on and on. It’s impressive.” 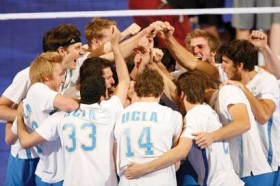 Current UC San Diego women’s coach Ricci Luyties is one of those success stories. In addition to starting for Scates at UCLA, Luyties went on to enjoy more spoils on the beach.

“I take many of the principles and philosophies that Al taught me as a player and use them in my coaching today,” he said. “I’m still involved in volleyball and I would directly relate that to Al Scates making my early experiences in the sport and everything that went along with it during my collegiate career fantastic. Al has been the top coach in the sport since I can remember. In my playing days, every player wanted to play for him and always believed he would teach what it takes to win championships. He adapted to every change in the sport throughout the years and transcended many of the systems used to advance the sport to today’s level.”

Brian Rofer also played for Scates and has been his top assistant for the past 22 years. He’s convinced Scates could have had the same success if he was coaching football, basketball or badminton.

“It wouldn’t make a different what sport he had come into,” Rofer says. “Al found his niche coaching volleyball. He loves what he does. He has the passion and an innate ability to draw out the competitive nature of his players. He found his niche in life. Can’t we all be that lucky? It would be wonderful because we would all be very successful. Al has never looked at coaching as getting up to go to work.”

Rofer has had the opportunity over the years to coach elsewhere, yet has always chosen to remain with Scates.

“I’ve had opportunities to go the same places some of the other assistant coaches here have gone,” Rofer stated. “But why leave a storied program and why stop working with the person I consider the greatest volleyball coach ever? I played for him starting when I was 18 and I learned his coaching philosophy working with him all these years. I’ve had the opportunity to learn from the best.”

JT Wenger played for Al Scates and later was an assistant coach on the UCLA men’s staff. He recently left to join the women’s volleyball staff at the University of Colorado. Wenger relayed this story about how Scates gives players every opportunity to succeed.

“Coach Scates has a reputation for being very distant from his players,” Wenger said. “I think that this has been developed because he is, deep inside, a big softy. He knows that taking the personal relationships out of coaching is the best way to remain objective when putting together the best lineup. Through the years, however, when a disgruntled player has come into the office with the intention of getting more of an opportunity, Coach Scates will almost always give it to him. The amazing thing about this is that there will be no preconceived notion as to how the athlete will fare. Quite simply, if he plays well, he stays on the first court, if he does not, he returns back to the second court. Coach Scates simply wants to put the best players on the court in order to be successful.”