Take a guess how much retiring UCLA men’s volleyball coach Al Scates was paid for his first season on the job in Westwood 50 years ago? Not a red cent. Scates, then in his early 20s, declined a payday in order to maintain his amateur eligibility and play in the 1964 Summer Olympics. 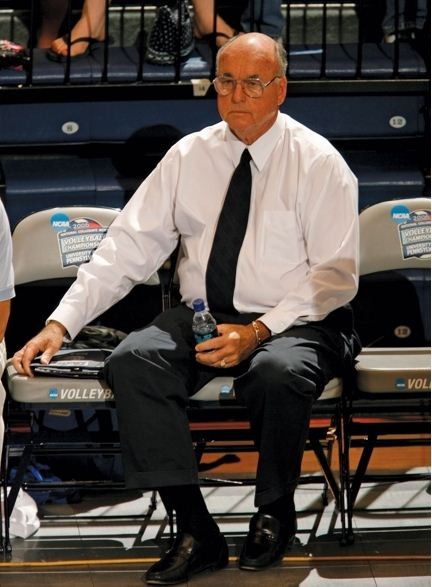 Take a guess how much retiring UCLA men’s volleyball coach Al Scates was paid for his first season on the job in Westwood 50 years ago?
Not a red cent.

Scates, then in his early 20s, declined a payday in order to maintain his amateur eligibility and play in the 1964 Summer Olympics.

“Our coach, Dr. Glen Egstrom took a sabbatical to do some research in Japan,” Scates recalls like it happened yesterday. “The job at UCLA was open and it was suggested I apply. I said I didn’t want to receive a salary and a big factor in that is I wanted to play in the Olympics. When the athletic director learned I would work for free he hired me on the spot and was very enthusiastic about it!”

These days, Scates, 73, is getting paid for what he loves to do. And he’s earned every cent of his salary and then some over the five decades he’s held court at UCLA. Under his direction, UCLA has won a record 19 NCAA titles and 1,236 matches (as of press time).

When Scates retires at the end of this season as the longest currently tenured coach in NCAA Division I athletics, no amount of money will ever be able to quantify the impact he’s had on men’s volleyball and the sport in general and the way he’s touched so many peoples’ lives over the years.

“Trying to [separate] Coach Scates from volleyball is like trying to imagine ‘The Godfather’ without Marlon Brando. It can’t be done,” said former UCLA standout Jeff Nygaard, now an assistant coach for the USC men’s team. “His tenure and influence has shaped the game in ways that are innumerable. Most everything I know about the game stems from my time in the gym at UCLA under Al’s coaching. His program was my launching pad for a lifelong career in volleyball—from playing for a few decades to hanging up the uniform for a coaching position.”

You’ll get that same type of response from countless other people that were influenced by Scates as either a player or coach over the years—just substitute the name of the person talking.

Kiraly marvels at several aspects of Scates’ coaching prowess. His marveling lasted several minutes in response to a single question.

“He seemed to study and pick apart and prepare for opponents at a level that people were not familiar with,” he said. “I don’t know what other coaches did in that era, but I was often astounded at the level of detail and study. He was the best-prepared coach and had the best prepared teams. It was a great lesson for me in preparation as a player and as a coach now in the more recent past.”

Kiraly also is impressed with how Scates adapted to the many changes in the sport over the span of 50 years.

“He has seen so much come and go and he’s had to adapt,” Kiraly said. “He’s gone from sideout scoring to rally scoring, from a 6-2 offense to a 5-1 offense, from no libero to a libero. Before there were no jump serves and now you have a lot of aggressive jump spin-servers. He’s gone through all those changes through the years and he still coaches and battles for championships. I am in awe of what he has put together.”

“Another thing that always struck me was his poise to think clearly in the moment, especially in the chaos of battle,” Kiraly said. “You would watch him and he would ooze poise and confidence. Maybe he hid it well inside? But outside he presented a demeanor that was infectious to his athletes. We always had contests to see who could do the best Al Scates timeout chuckle. He would call timeout and do this chuckle and then say, ‘Boys, this is exactly what we are going to do next. We’re going to pass the ball here and run this play and get a sideout and then we’ll serve tough and block at this angle and good things will happen.’ And very often, good things happened.”

Fellow beach great Sinjin Smith, a senior when Kiraly was a freshman at UCLA, added that Scates also knew how to get the maximum from his players whether they were future Olympians or not. Smith is a volunteer assistant coach on Scates’ staff this season.

“Al has a sense about people and how to get the best out of them when he needs it,” Smith said. “Al seemed to always know who was the right person to play at the right time. He was never afraid to bring someone off the bench to play at a critical time even if they hadn’t played for a long time. Al exudes a certain confidence that is contagious with his players. There was never a time that you didn’t feel like you could win a game or match when playing for Al. He seemed to know what other teams were going to do, sometimes before they knew.”

Fellow men’s coaching great Marv Dunphy from Pepperdine has gone up against Scates many times over the years.

“For years, I felt that to win a national championship at Pepperdine, we either had to knock Al’s team out on the way to the finals or in the finals,” Dunphy said. “In Al Scates, men’s volleyball has had the most successful coach in NCAA athletics.”

Dunphy added that success boils down to Scates’ adaptability to his roster.

“Al knew how to coach talent,” he said. “Not all coaches do. His teams seldom beat themselves.”

Smith, one of 78 All-Americans to play under Scates (Scates also has coached nine NCAA Players of the Year), recalls an incident his freshman year at UCLA that has stuck with him throughout the years.

“After the nervousness of becoming part of the legendary program had gone away and I felt like I was really part of the program, I was an integral part of the first 12 players that would train against each other on the first court. During one practice, Al noticed I didn’t go for a ball and said, ‘Smith, go over to the brown squad (that was located behind the blue curtain).’

“It was devastating for me to be demoted and sent down to the second 12 who were all fighting to come over to the main court. It took me about a week of trying 110 percent to make it back to the main court. It was a lesson I took with me for the rest of my career. It was always that way with Al. A few words was all it took for him to get his point across. I don’t know if Al ever needed a sit-down conversation to get the most out of his guys. It was always very clear what he wanted out of everyone on the team.”

Current UCLA women’s coach Mike Sealy, who directed the Bruins to the 2011 NCAA title, played for Scates and was an assistant coach on the men’s staff prior to taking the reins of the University of Hawaii women’s program and then the UCLA women. Sealy appreciated the even-keel manner in which Scates conducted business both on and off the court.

“Al is always great at just being himself,” Sealy said. “He lets people learn from their own mistakes. It’s up to you to challenge yourself to be great. He didn’t force things down your throat. He was not afraid to let you fall down and scrape your knee and then get back up before you saw the person you were going to become. He gave a lot of confidence to the players that played for him. Sports are enough of an emotional rollercoaster to begin with. Al never added his own drama into that.”

“Al always lets me know my shortcomings. I appreciate his decisive honesty, I’ll call it that,” he said. “He lets you know what he wants and when he wants it. He’s not shy about being specific in that nature.”

CAN M: Graham Vigrass retires from the...