Preparation for the 2012 Volley All Festival has officially begun with letters encouraging national federations to organise tournaments distributed as the FIVB hopes to build on the global event. 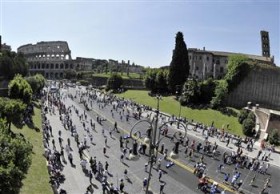 The Volley All Festival is a universal project taking place on a yearly basis with thousands of young people participating in special volleyball events worldwide over the same weekend, usually at the end of June. It is a unique opportunity for national federations to collaborate with the FIVB in an effort to further spread the sport to all corners of the globe.

Over 50 countries held events in 2011 with 417,570 people participating, making it one of the most successful years yet.

This year it is hoped that more people join in the fun to help “keep the ball flying” around the world.

“It is vital that national federations host such events to attract and endorse children and youth activities as well as to promote volleyball and beach volleyball as a fun recreational activity which can be played both indoors and outdoors,” FIVB Technical and Development director Helgi Thorsteinsson said in a letter to national federations earlier this year.

Christchurch in New Zealand is just one of many Volley All Festivals which have already been held in 2012. Their event on April 3 attracted 850 children from 10 to 12-years-old.