Guillermo Hernan Ruperez, captain of Spain, stated after the match: 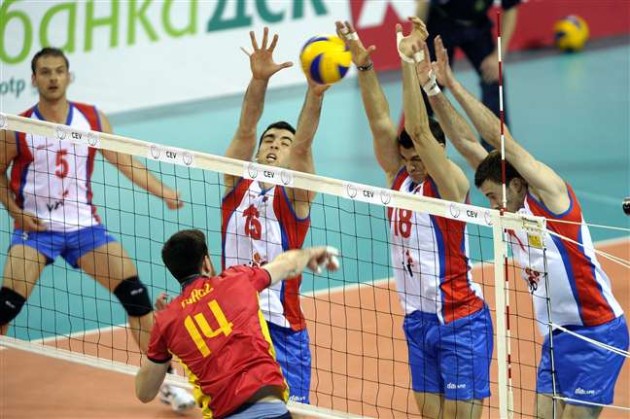 “We knew the potential of our opponent and tried to trouble them in every way, but we made too many mistakes.  It was hard for us to score even when we received well.  We are already thinking of tomorrow’s game against Bulgaria. It will be like a final for us.”  His coach Fernando Munoz Benitez seemed to agree: ”Our team made too many mistakes in the first set and lost part of its concentration afterwards.  Serbia was technically well prepared and made the game very difficult for us.”

“Congratulations for Spain!  The team showed some brave volleyball today,” Serbia’s captain Bojan Janic commented.  ”On the other hand, we played much better than yesterday and deserved to win.  I hope we will show our maximum tomorrow and get ready for the semifinals.”  Head coach Igor Kolakovic was pleased by the performance of his team in the first two sets, but he thinks it can be even better: ”We had some problems in serving and reception in the second part of the game, but finished the match according to plan. We are expecting tomorrow’s crucial game and we hope to be here on Saturday.”