Japan rolled past Thailand in straight sets (25-17, 25-18, 25-21) to rack up its third straight victory on the third day of action in the FIVB Women's World Olympic Qualifying Tournament at Tokyo Metropolitan Gym on Tuesday. 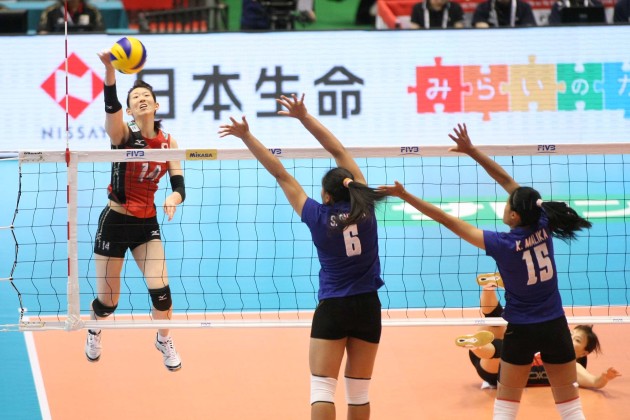 The Japanese squad stopped their opponents by establishing a huge 17-4 advantage in blocks.

Japan (3-0) utilized a mix of speed and power to overwhelm Thailand, which slid to 1-2 after the defeat. The Japanese also made several fine digs to keep points alive and ultimately win them.

A block by Mai Yamaguchi gave Japan 4-1 at the start of the first set and Thailand then called a timeout. Yamaguchi‘s spike made it 7-2 for Japan and a reception error by the Thails put Japan up 8-2 at the first TTO. An Ebata spike put Japan in front 11-4 as Thailand struggled to stay in contact. Kimura’s spike put the count at 13-7, but Sittirak slowed Japan with a spike and Tomkom Nootsara followed with a service ace. A spike by Kanthong pulled Thailand with four points at 14-10. Japan was up 16-10 at the second TTO. Another Yamaguchi spike made it 18-12 for Japan. With Japan on top 20-13, Thailand called a timeout. Ebata pounded a spike for 22-15 as Japan closed in on the set. Onuma ripped a spike to make it 23-15. A spike by Maiko Kano made it 24-17 and Kimura blasted a spike to give Japan the set 25-17.

Ebata racked up eight points in the set, while Kanthong and Sittirak had four points each. Ebata’s block gave Japan a 5-2 edge in the second set and Thailand called timeout. An ace by Tomkom made it 5-4 and they moved in front 6-5 on a reception error. Japan retook the lead 7-6 on a Kimura spike that leveled Kanthong and led 8-6 at the first TTO. A Kimura block made it 10-7 for Japan, but Thailand was start to show energy in its play. Tomkom’s block tied it 11-11 but Japan went back in front after a long rally. Back and forth it went, with neither side able to gain a significant advantage. A service error put Japan in front 16-15 at the second TTO. Yamaguchi‘s spike saw Japan move ahead by three at 18-15 and Ebata followed with a spike for 19-15. Kanthong‘s service error made it 21-17 for Japan and Ebata followed with a big smash as Japan eyed the set. Japan claimed the set 25-18 on consecutive blocks by Maiko.

Japan picked up where they left off in the third set with a Kimura spike making it 4-1. A service error by Kanthong saw Japan move ahead 7-4 and was up 8-5 at the first TTO. A spike by Sittirak made it 9-6. Thailand substituted freely in an attempt to slow Japan, but nothing seemed to work for them on this night. Araki hammered a spiked and Japan was in front 12-7. Kimura missed a spike and Thailand crept within two at 12-10 and Japan called time. Blocks by Kimura and Kanako Hirai took Japan into the second TTO up 16-11. Thailand came within two at 16-14 on a reception error and Japan took time. Wilavan Apinyapong  sent a spike into the net and Japan led 18-15. Trailing 19-15, the Thais called a timeout. Ebata‘s spike made it 21-17 as Japan made a final push for the finish line. An Ebata block put Japan within two points of victory at 23-18. Kimura’s spike made it match point at 24-21 and Ebata made a beautiful dig that ended with another Kimura spike and victory for Japan at 25-21.