Since the tournament doubles as Asian Continental Olympic Qualifier, the top-three teams at the end of the competition plus the best Asian not among the medalists will get spots for the Olympics at the British capital. 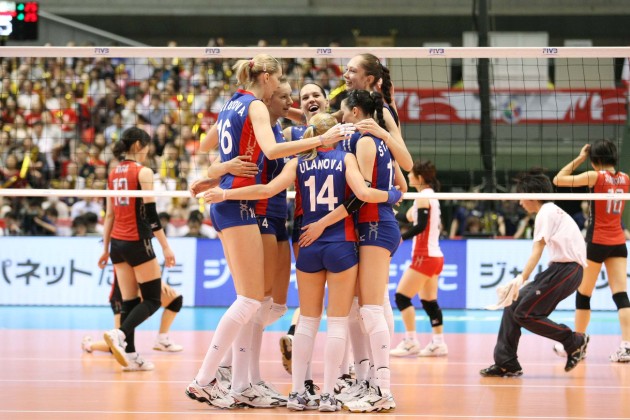 “I’m very satisfied with the result,” Russia’s coach Sergey Ovchinnikov said. “We have had problems in the past against Japan with receiving and their fast attack, but we solved them tonight.”

“Today against Thailand was tough,” Korea’s coach Kim Hyung-Sil said. “We tried to attack as fast as possible. I would like to see three Asian teams – Korea, Japan and Thailand make it to the Olympics.”

“We are not satisfied and I hope we will play better tomorrow and finish the tournament in the right way,” Serbia’s coach Zoran Terzic said. “I congratulate my team for the victory and Peru played well.”

“I would like to praise our players,” Cuba’s coach Juan Carlos Gala expressed. “After last night’s loss, I told them not to give up and keep playing high quality until the end. Our blocking and serving were good.”