The Netherlands scored on Saturday their second win in the first round of action for Pool C of the 2012 CEV Volleyball European League – Women as they downed Israel in three straight sets (25-13, 25-19, and 25-19). 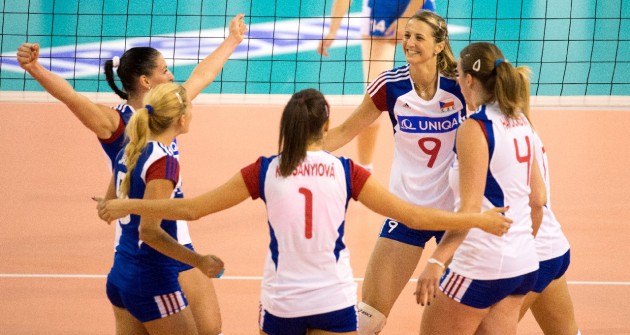 Even though they have traveled to Brno without some of their stars, the “Oranjes” still dominated the scene with a great contribution coming from their middle blockers. Israel played quite aggressively in set two and three but still the difference was clear out there on court, with the Netherlands attacking with 46% of efficiency vs. 26% registered by the Israelis. Debby Stam-Pilon and Lonneke Sloetjes paced the Dutch side by scoring 13 points apiece.

“Our group is very young and the players are just competing in their first international tournament. We did lack aggressiveness and efficiency in attack but I hope tomorrow we can claim our first win with Greece” said Israel’s head coach Arie Selinger.

“We are happy with our performances so far and we just take it match after match; we do not want to underestimate our opponents, especially as tomorrow we play the hosts of the Czech Republic” stressed Dutch captain Debby Stam-Pilon.

The hosts of the Czech Republic emulated the Netherlands by scoring a 3:0 win (25-20, 25-18, and 25-11) to edge Greece and get the right boost of confidence for the “big match” against the oranjes coming up on Sunday. Italian-born head coach Carlo Parisi slightly modified his starting six with Karolina Bednarova replacing team captain Helena Havelkova, with his side quickly going up 6:2 and 8:6 in the opening set. With Aneta Havlickova contributing some blocks, the home side cruised away to 24:20 and it was Michaela Monzoni that sealed the final 25-20. The local heroines were loudly cheered by the audience in Brno with libero Julie Jasova deserving some big applause for her great skills in defense. The Czech Republic comfortably set the pace of the game (12:6) and the 25-18 that followed on the scoreboard was a clear confirmation of the Czech supremacy out there on the court. Aneta Havlickova – who finished the game as top scorer with 18 points – did anchor the Czech offense also in set 3 (5:2, 8:3, and 14:7) while Parisi used this opportunity to test some of his reserve players, with the first match point being sealed by local favorite Ivona Svobodnikova who plays for the club of Kralovo Pole BRNO.

“I think we played much better than we did on Friday with Israel. We did not make any easy errors and clipped this well deserved win” said Havlickova after the game. “I am impressed with the crowd here in Brno” added her teammate Karolina Bednarova. “They created a great atmosphere in the sports hall. Personally I was a little nervous before the start of the game but I gradually got into it”. “We played a good match and even though we know that Greece does not belong to the real elite in Europe, we still did not want to take that game too easily. We will check our quality tomorrow as we play the Netherlands and this will be the most important match of this home round. We have been scouting the orange girls in these days and we will get ready for this clash” stated Carlo Parisi.

“We played pretty well in the first set but we failed dramatically in the next ones. Tomorrow we play Israel and we will try to claim our first win of the tournament” singled out Greece’s Izabel Ivanova.