Australia downed Iran in four sets (17-25, 25-18, 25-18, 25-23) to remain unbeaten on the third day of action in the FIVB Men's World Olympic Qualifying Tournament at Tokyo Metropolitan Gym on Tuesday.

The win raised Australia’s record to 3-0, while Iran dropped to 2-1. 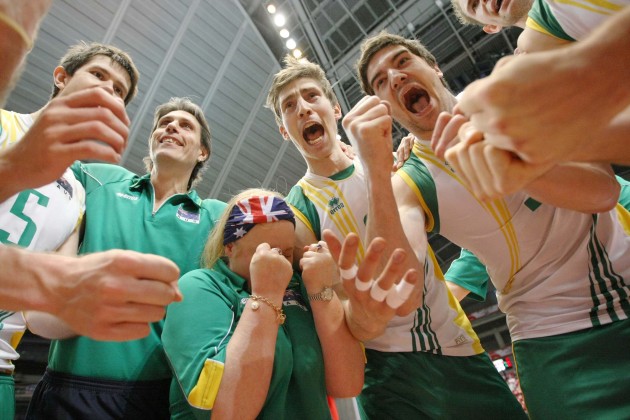 Edgar Thomas sparked Australia with a match-high 24 points. Adam White rang up 22 points in the victory.

Australia struggled in the opening set, but then came roaring back behind their powerful attack and strong defense to take the next three.

A block by Mohammad Mousavi gave Iran a 5-2 lead in the first set. A spike by Farhad Zarini made it 7-3 for Iran and Thomas sent a spike long to make it 8-3 at the first TTO. Nadi‘s block put Iran up 11-7. A block put Iran on top 15-10 and they led 16-10 at the second TTO after a block by Amir Ghafour. Australia trailed 17-11 after a nice spike by Aidan Zingel off an option play. Nadi’s spike made it 20-13. Zarini smashed a spike down the middle and Iran led 22-15. Ghafour’s spike gave Iran set point at 24-16 and Mousavi clinched it 25-17 with a spike. Mousavi had six points in the set, as did Adam White.

A reception error by Mousavi saw Australia jump to a 5-1 advantage in the second set. Igor Yudin‘s block made it 7-3 for Australia. Ghafour served into the net and Australia was up 8-4 at the first TTO. Nadi‘s serve sailed long and Australia led 10-6. A block by Zarini pulled Iran within two at 12-10. Australia led 15-12 after a spike by Ghafour. A spike by Thomas put Australia in front 16-13 at the second TTO. A service ace by Yudin gave Australia a 19-15 lead and Iran called a timeout. White’s spike made it 21-16. A Thomas spike put Australia within two points of the set at 23-17. Mousavi served into the net and Australia had set point at 24-18. They took the set 25-18 on a reception error.

Yudin‘s spike put Australia up 5-2 in the fourth set. A spike by Thomas made it 7-5. Ghafour‘s spike equalized at 10-10. Australia led 8-7 at the first TTO on a spike by Yudin. Another Yudin spike made it 10-8. Another spike by Thomas gave Australia a 15-14 edge. Thomas added another and Australia was on top 16-14 at the second TTO. Iran moved ahead 18-17 on a spike by Zarini. Thomas evened it at 18-18 with a spike. White made it 20-19 with a well-placed spike in the corner. Thomas slammed another spike and Australia was two points from the match at 23-21. Passier‘s block made it match point at 24-22 and Australia completed the triumph on a Yudin spike.

Australia will battle Serbia on Wednesday, while Iran goes against Puerto Rico.

Serbia and China face off in the next match on Tuesday.