CEV: CEV Board re-asserts role of European Volleyball on the international scene

The members of the CEV Board of Administration got together this Saturday in Finland’s oldest city for their second working session of the year as Turku is currently playing host to the Power Cup, i.e. the world’s largest mass Volleyball festival. 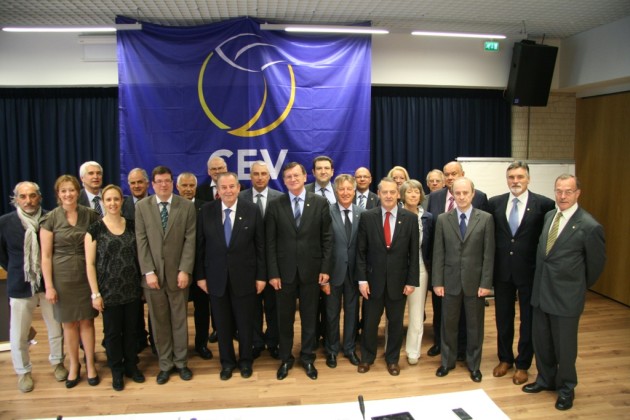 CEV Board in Turku

The CEV Board expressed its gratitude to CEV MPresident André Meyer for having tirelessly and continuously represented and defended Europe’s interests, thereby clearly stating the importance of a sense of unity and cohesion among all National Federations in order to assert and back up Europe’s position when it comes to the policies adopted and implemented by the FIVB.
The major significance of European Volleyball is testified by the extremely positive outcome of the Olympic qualification process whereby half of the spots available for the Volleyball tournaments coming up this July in London have been taken by European teams. This result certifies once more the strong positioning of Europe’s Volleyball worldwide and its importance in stimulating the development of the sport on a worldwide scale in the years to come.
While discussing the many items included in the agenda, the Board members stressed out that the sport and the fulfillment of its needs remain the main reference for any decision to be taken for the promotion of Volleyball in Europe and its governance via the many competitions placed under the authority of the CEV.
As the deadline for application was set for this past May, the CEV Board members started studying the four candidatures submitted to host the final round of the 2015 European Championship, with two joint bids having been received for the men’s competition (Italy/Bulgaria and Finland/Estonia), while the Netherlands and Russia have applied to stage the women’s finals.
A European Ranking for national teams in all age groups (senior, junior and youth) was finally approved by the BOA after a proposal was preliminarily prepared and worked out by the European Sports Organizing Commission (ESOC).
The CEV Board expressed its satisfaction also with the very positive outcome of the CEV Beach Volleyball European Championship – Final recently held in The Hague/Scheveningen and praised also the work performed by the organizers of the semifinal stage of the Continental Cup hosted by France and Switzerland some weeks ago.
The final four of the 2012 CEV Volleyball European League – Men (whose organizer was still pending) was eventually assigned to Turkey, with the absolute climax of this competition confirmed for June 30-July 1 and its venue to be determined in the next days.
While receiving updates by the Presidents of the various Commissions, the CEV Board decided that the dates, formula and venue of the European Qualification tournament for the 2013 FIVB World Grand Prix will be announced only after completion of the 2012 CEV Volleyball European League whose finals are scheduled for early July in Karlovy Vary (Czech Republic).
As for the 2013 European Cups, the Board strongly supported the extension of the starting field for the next edition of the CEV Volleyball Champions League that will be joined by 28 men’s and 24 women’s teams, while praising other great figures as a total of 181 clubs have been registered for the season that is set to unfold this coming October.
Finally, the CEV Board agreed upon the formula whereby teams will qualify for the 2014 FIVB World Championship as well as upon allocating a financial contribution to support the organizers of the first qualification round.

CEV M: 7 out of 12 teams qualified for London Olympics are from Europe!!