he FIVB was saddened to learn of the passing of legendary volleyball great Gene Selznick who passed on June 10 after a series of health issues culminating in pneumonia. 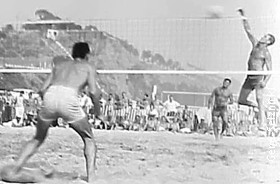 Gene Selznick was one of the most talented volleyball players on both the indoor and beach courts, but was also a visionary who helped mold the modern game

To call Gene Selznick one of the greatest players in the history of volleyball is a disservice. Selznick was also a great innovator, a wonderful entertainer, an outstanding coach and an outspoken individual who first started playing the game in the sand when he was 18-years-old.

“Volleyball has lost one of the most remarkable performers and personalities in our entire life,”

FIVB Board of Administration member and USA Volleyball CEO Doug Beal said. “Gene Selznick’s entire life was lived through and about the sport of volleyball. It is hard to imagine anyone who will by the level of their skill and personality to have a greater influence on the sport he loved so much. Gene’s accomplishments are legendary and he was truly someone who became larger than life. He was innovative, creative, stubborn, dogmatic, visionary and enormously influential. His mark on the sport will last for as long as most of us will know, and we have truly lost a significant portion of our history. I cherish the memories of the times I spent with Gene and know I was one of so many that he touched and influenced in his long tenure in our sport.”

Gene Selznick was one of the most talented volleyball players on both the indoor and beach courts, but was also a visionary who helped mould the modern game. But Selznick was even more. He was a visionary whose efforts to change the way the game was played in the United States met with staunch opposition from the USA Volleyball leadership at the time and led to the only regret about a sport he loves so much when he was not allowed to participate on the US team that participated in the 1964 Olympic Games.

Selznick, a 1988 inductee into the Volleyball Hall of Fame, was one of the most talented volleyball players who could play offense and defence both indoor and on the sand. He was selected USA volleyball first-team All-American 10 times between 1951 and 1965. Selznick was selected the USA Volleyball Open National Championships most valuable player three times following the 1959, 1960 and 1962 events. As part of a team, Selznick helped his clubs to national titles in 1951-1953 and 1956 with Hollywood YMCA, 1960 and 1965 with Los Angeles Westside Jewish Community Center and 1966 with Santa Monica Sand and Sea Club.

“The biggest contribution Gene made was as architect of the modern game,” said Ron Lang, who was one of Selznick’s indoor teammates and playing partners on the beach for many years. “After the 1956 FIVB World Championship, he came back and wanted us to play more like the Europeans did. He started the concept of the two-man block. I don’t think Gene has gotten enough recognition for what he gave to the game. He was a great defensive player on the beach. He just loved the game and was always striving to better the game. He was one of a kind.”

“Gene was bigger than life,” said Mike O’Hara, who played against Selznick on many occasions on the beach. “The guy had tremendous skills and a dominant personality that resulted in people wanting to be on his team, whether it was doubles on the beach or an indoor team.“

Selznick, who won the King of the Beach crown from 1950 to 1966, also won countless tournaments on the beaches of California, including every Laguna Beach Open from 1955 to 1961. He won a total of 38 of 63 tournaments he played in, along with 19 runner-up finishes. Teamed with Bernie Holtzman, the tandem won 18 tournaments and advanced to the finals in all 20 events. Selznick earned “Mr. All-World” status as most valuable player of an international tournament of 24 teams held in 1956.

Selznick, who also introduced basketball legend Wilt Chamberlin to the game of beach volleyball, won his first beach tournament with Ev Keller at the 1950 State Beach Men’s Open, and later teamed with Don McMahon and Lang to win tournaments.

“The thing that made beach volleyball go was the period in the late 1950s and early 1960s when Gene and his partner Ron Lang faced myself and my partner Mike Bright. It was like a war. Tens of thousands of fans would line up to watch us both play on the court, but also the talking through the net. Those were some crazy knockdown matches that would go late into the night. That is when beach volleyball began to grow as our matches with Gene and Ron attracted a lot of athletes to the game that later went on to be stars such as Sinjin Smith, Randy Stoklos and a lot of other great stars. The one time Gene and I played together was in in Rio De Janeiro at a world indoor volleyball tournament. He and I went to Copacabana Beach and beat up the best they could put up against us. I was told later that the Brazilians took that lesson to heart and began to start to develop great men’s and women’s beach volleyball teams ever since. The beach was great fun, the parties afterwards were sensational and many celebrities came out to watch. It was a golden time.“

During his great playing career, Selznick also tried his hand at coaching, leading the US Women to the gold medal at the 1963 Pan Am Games.

Later, Selznick became an accomplish coach on the sand that originated his game. At the 1996 Atlanta Olympic Games, he coached Sinjin Smith and Carl Henkel to a near upset of eventual gold-medalists Karch Kiraly and Kent Steffes. At the 2000 Olympic Games, Selznick coached Misty May-Treanor and Holly McPeak and would later train Kerri Walsh.

He is survived by his sons Dane, Bob and Jack.

ARG: As every year, another successful FIVB festival in Villa Dora