WGP W: Japan coach Manabe – This will also be a tough week

All four coaches from Pool F of the 2012 FIVB World Grand Prix were keen to begin the second round of action in Komaki, Japan after the press conference was held on Thursday. 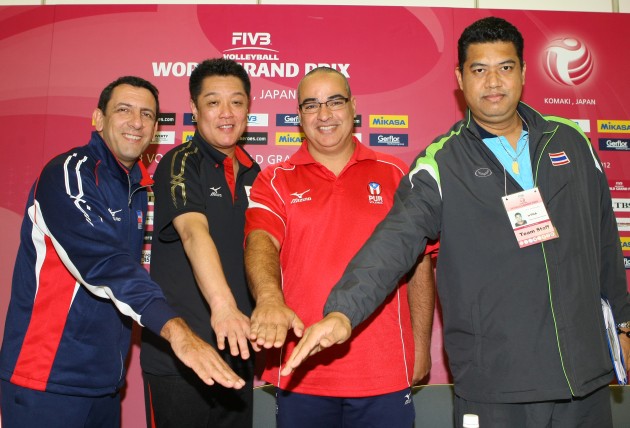 Thailand, Puerto Rico, Dominican Republic and hosts Japan are all set to clash across the weekend.

Dominican Republic coach Marcos Kwiek: “This time our team has much same members as in the Olympic preliminaries. This time our player De La Cruz is not included, but our condition is good. This is the second week of the World Grand Prix, and even though our first week not so good, we saw improvement from the first game to the third. For Komaki we’ll play as strong as we can and hope for a better result.”

Japan coach Masayosi Manabe: “This will also be a tough week with three strong teams. We’ll face each match with the best of our power.”

Puerto Rico coach David Aleman: “First we’d like to thank Komaki for having us here. We have worked hard to qualify for the Grand Prix, and we’ve worked hard to be here. In the first week we had one victory, but got better after each match. We’re here to play hard against the best teams in world, and we’re prepared for the competition.”

Thailand coach Radchatagriengkai Kiattipong: “This time the second week of the World Grand Prix and our team is in good health. We’re ready to play with all these good teams here, and we’ll try to do our best.”