Despite given promises to allow female fans to the stands during the 2015 FIVB World League, Iranian Volleyball Federation was helpless on a decision of authorities to keep preventing women to watch the matches, but… 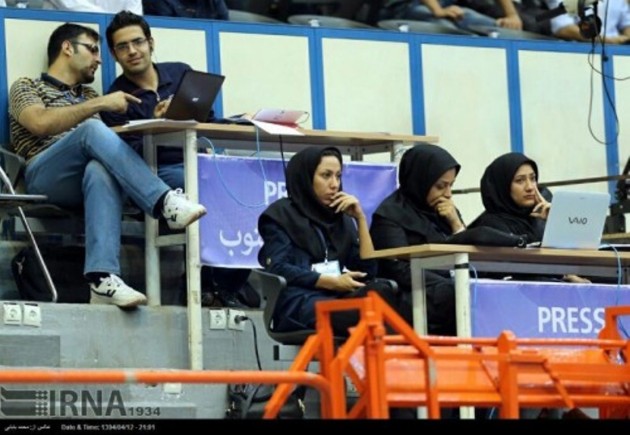 A few were present at „Azadi Sports Arena“ in Tehren during first WL clash against Russia, on July 3. As you can see on a photo published on gazzetta.it, three Iranian female journalists were allowed to see the game.

It seems that the International Volleyball Federation (FIVB) doesn’t want to put pressure on the Iranian VF on this matter as country’s officials prevented Iranian women from entering the hall in four previous WL matches of Iran on a home soil.

The FIVB has so far failed to penalize Iran or publicly speak out against the ban, which contravenes the principle of gender non-discrimination in sports.

This situation has launched various initiatives on punishing Iranian Volleyball Federation from inside the country, but from the outside as well. One of them was by the “Human Rights Watch”.

The 2014 ban on women spectators led to the arrest of several men and women protesting the ban.

Recall, Ghoncheh Ghavami, an Iranian-British, was arrested by authorities on June 30, 2014 after she attempted to enter the hall and released in November.

The male-only policy for spectators at volleyball matches in Iran dates back to 2012.

POL W: Skowronska-Dolata about Leon’s desire to play for Poland

WL: Serbia takes win and keeps Russia in race for survival in Group 1

FROM DESPAIR TO SHINE – What have...