Last year's winner, the team of USA has taken the bronze medal in World League 2015 after 3-0 win over Poland in match for third place. 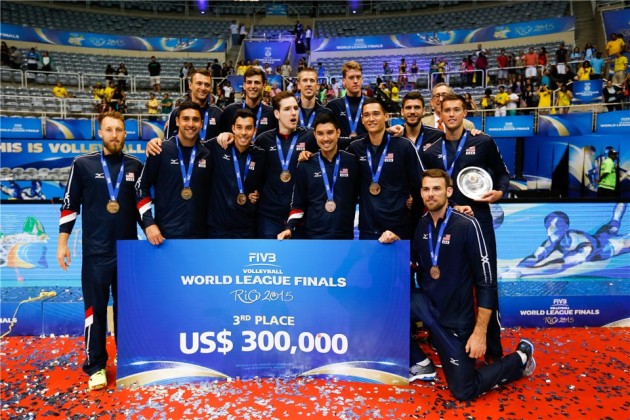 USA was making a pressure on Poland side from the start of the bronze-medal match. They opened set with 4-1 and 8-5 and “point by point” USA went on +6 (13-7). They played calmly and very responsibly while Poles were without energy. Americans were too strong on the net but first of all mentally and they had 21-13. It was amazing, everybody thought that USA will easily close this set but Poland woken up. Americans made few errors in row and the result was 22-20. Sander stopped serie of Poles for 23-20 but Mika scored another point for his team. Christenson made new mistake for 23-22. Buszek returned point to USA for 24-22 and thanks to the high block of Lee over Konarski , USA finished the first set. Antiga asked for video check but the video shows thar there was no touch on the net by the blockers, so the referees confirmed the set to team USA, 25-22.

At the start of the second set USA led 9-7 thanks to the good serve of Russell but “white and red” played much better than set before. They equalized 9-9 and we must say both USA and Poland had a good receive and defense. With three points in row USA escaped to opponent on 14-10, Russell finished the rally after two miraculous saves. Americans played like from the beginning of the match and they had 20-18. The Polish block did not stop Sander to scored 23-19 and after time out of Antiga , he made ace for set point (24-19). Mika has confused USA with his serves and with three aces Poland came on 24-23. Last attack of Poland touch Anderson in the block and after video check Polish coach was right. They repeated that point but this time Mika made service mistake for 25-23. USA is leading 2-0 in sets.

Konarski who replaced Kurek was real refreshment for the Polish team. Thanks to his strong attacks and block on the second technical time out in the third set Poland had 16-14. Poland had 22-17 after two amazing block of Nowakowski and Buszek. Strong attack of Anderson and block of Holt brought new two points for USA (22-19). Poland once again made a great block on Anderson’s attack for 23-19 but in the final of the set USA made two blocks (Holt and Christenson) for 23-23. After Sander’s serve the referees pointed an ace, but Antiga calls a video-check which confirmed the ace. 24-23. Bronze medal went to USA after kill of Russell 25-23.

Taylor Sander was the top scorer of Bronze Medal match with 14 points.

OFFICIAL: Saatkamp – “I came to Modena to try to win all trophies”

Antiga didn’t know what to do today. He looked like a lost kid. Kurek should be on the bench after the first set for starters. And Poland lost last a set leading 23:19, with basically no reaction from Stephen. That was horrible to watch.

LOL, What happened to the World Champion ? I see Corrupted FIVB is not helping anymore

1st – It’s only World League, it’s not top priority for any of the top teams, 2 – Poland has totally different squad than in WCH in 2014 cause 4 of main first 6 players finished their national team careers (Wlazły, Winiarski, Zagumny & Ignaczak). 3 – Your brain is corrupted.

@BLUEREDWHITE You’re talking about corruption. I think about your federation. Russia lost everything, took the last place, and suddenly FIVB want changes the rules of the World League only to Russia could play in next season. Still you want to talk about corruption? Youthful hypocrite.

If Poland could have won it then IT WAS WORLD LEAGUE but now that they lost, it’s only world league

There were 3 points I mentioned not only one you dumb sad kid. Maybe you’re from Serbia, they’ree equally buttheart like Russians and Iranians blueredwhite. Look at the FIVB points table – 2015 WC will be 100 points, WL is 50 points for win. So what is more important and what tourney is the main goal this season for the teams? When will they have their best form, now or during WC? Can you use your brain once in your life?

@blueredwhite man, you really have some terrible issues and a huge inferiority complex. I feel sorry for you. You constantly trash Poland, but where is Brazil then? Where is Russia? Where is Italy? And finally, where is your favourite and all time best Iran??? This is sport, and if you don’t get it, you really need some serious help!!! Instead of talking sh*t abt other teams/countries, take a good look at the one you support.

ps. This site should ban trolling. Congrants to the U.S and France. Great games! Hope next time, the victory will be ours.

@worried blueredwhite is not an Iranian fan .

Yes I know Iran’s flag. There’s just many comments here in which people call him Iranian for some reason. He’s a douche no matter where is he from.

@Parisa I know, it’s not about the colors though:) it’s enough to read some other comments made by the blueredwhite to find out that he supports Iranian team. Still, it is not important. Many times I read a lot of offensive comments on this site and I simply don’t like it (blueredwhite is a very vivid example of that). Maybe I’m naive but I believe that volleyball – in general – is a beautiful sport and its beauty also results from its unpredictability. I support Polish team, but it doesn’t mean that I don’t appreciate good volleyball played by other teams. And I don’t have to disrespect them (unfairly) on every possible occasion to feel better. That’s all.

according to paul sunderland its the first time that the World Champion didn’t won the world league. first time. and i dunno what happen to antiga 6 matches, usa won 5 hahaha

@ dee jae hmm and what’s exactly your point? btw: WCH2010 – Brazil; WLCH2011 – Russia…
Besides I think it just proves that volleyball these days is not dominated by just one team and there are many equal oppontents, which only makes everything more interesting and unexpected. The match bewteen France and Poland was a very close one. Anyone could have won this, especially that the style of those two teams is very similar. France won. Poland played really bad the next day. Maybe it was the lack of motivation as they just lost the opportunity to win gold or maybe the USA was simply better that day. Sport.

Oh no… This is definitely the worse...