The Czech Republic claimed the trophy of the 2012 CEV Volleyball European League - Women after beating Bulgaria 3:0 (26-24, 25-18, and 25-23) in a spectacular final match thereby coming out on top of the charts for the first time in the history of the competition. 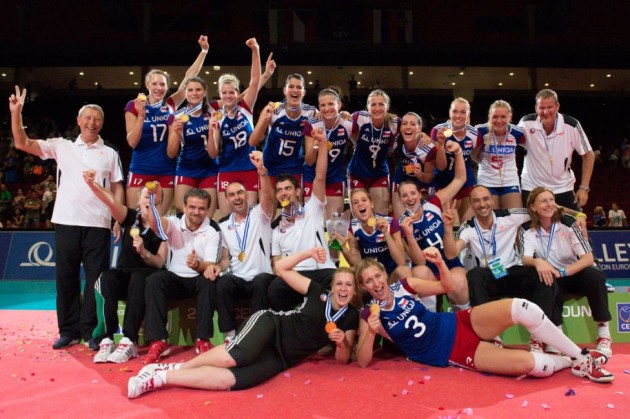 The 3’800 spectators present at KV Arena in Karlovy Vary witnessed a great final whereby the local heroines reached the top position of the podium after winning in a sensational demonstration of tenacity and staggering collective skills in the title deciding match. The unprecedented final game between two teams searching for their first European League title was meant to be dazzling and the feeling turned to be true as the emotion and excitement galvanized every second of the game.

The Bulgarian squad tried to impose its control of the clash early in the encounter, through the spikes by an effective Elitsa Vasileva. However, the distribution by Lucie Muhlsteinova and the wonderful contribution of Aneta Havlickova enabled the Czech side to stop the rivals’ attempts and win the first set in a tied finish (26-24).

The support of the audience gave wings to the local players, who ended up paving their way to the title in the decisive following sets. Bulgaria relied heavily on the great performances of Elitsa Vasileva and Strashimira Filipova to counter the passionate actions from the other side of the net. In a remarkable effort, the visiting squad was able to balance the extraordinary efficiency of the team trained by Carlo Parisi, forcing the equalizer in the second and third periods through the dominant work of its offensive players.

Nonetheless, the Czech Republic proved to have the motivation and the inspiration on its side, when the local heroines found the power to impose their mighty performance and take the required advantage in the scoreboard to finally close the sets 25-18 and 25-23. Even in the disputed third set, when the spikes by best scorer and best spiker of the tournament, Elitsa Vasileva, put the audience on its grips for the prospects of a partial victory of Bulgaria, the local team presented a sensational collective playing that allowed the conclusion of the period in a heart-breaking finish. With the 25-23, the KV Arena erupted in an explosion of joy, as the local team made its dream come true: the Czech Republic was proclaimed the winning team of the 2012 CEV Volleyball European League.