26 young male and female volleyball players broke the ice in Porec last week, as they became the first players to attend the new volleyball camp, "Volleyteam".

First participants of the “Volleyteam” camp with their coaches

The founder and leader of the “Volleyteam” camp is Ljubo Travica, former player of Mladost Zagreb and the National team of Yugoslavia. Later he continued his career as a player and a coach in Italy, Greece and Poland.

Players from Slovenia, Italy and Croatia, ages 15 and 16, but also some younger (one boy is only 8 years old), chose to spend part of their summer brake playing their favorite game. They will be under the guidance of four coaches, Zina Urlic, Miodrag Stojakovic, Dragan Salapura and Samuel Benussi. Daily activities are held in the Inter-sport center and the outdors volleyball court in Green Laguna.

“In this first year we will have three groups that will be here for a week, and on the 5th of July we should have over 70 participants, a number we are extremely pleased with. Being that this is our first year, it would be hard to take any more players” Travica said. “In our first week we already have 26 attendants, and you should know that in many countries, students haven’t finished their school years yet. We have players coming from Poland, Italy, Slovenia, Macedonia, Serbia, and off course Croatia. With the knowledge we have gathered this year, I believe that the next will be even better, and that the number of participants will be in the hundreds, and in the following years we will maybe expand our program on the coaches as well.“ 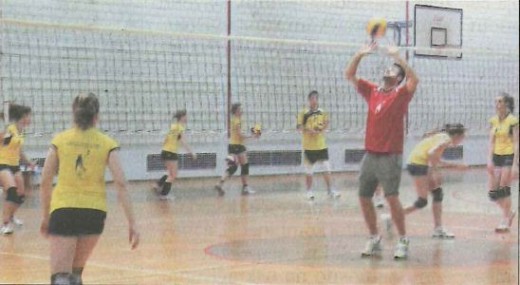 Future volleyball players in the making

The players that are in the camp have different levels of volleyball skills. Regarding that a plan of training is adjusted to them.

“On the first day we test the players to see what is their volleyball level, and according to the test we classify them in to three groups, where their needs are met. Our goal is not only to improve their volleyball skills, but also the other characteristics an athlete must have, like being a part of a collective, to take resposnibility for their actions, and to become independent. That is important bearing in mind that a lot of the players will be away from their parents for several days maybe the first time in their lives. And besides that, this is an international camp, and the players will get the chance to meet people who are not from their country. Off course, besides training there will also be time for fun, picnics and lot more interesting things to do“. Travica added

It is planed that many famous volleyball players visit the camp. They already had visitors from the Italian National team, the team captain Cristian Savani, and Dragan Travica, Ljuba Travica‘s (the founder and the leader of the camp) son.