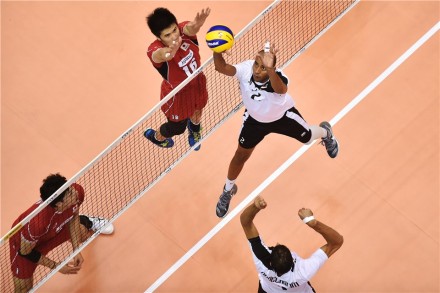 Carried by support of the fans in Hiroshima, the hosts set off the match amazingly. After Shimizu’s ace it was already 4-1! This kind of start totally disturbed Egypt’s players.

They couldn’t recover until the end of the first set. Young Japanese prospect Ishikawa demonstrated atomic volleyball and thanks to him, the Asian team gained unattainable lead until final 25-19.

Egypt didn’t allow itself the another poor beginning of the set. Although Japan had the initiative, having one or two points more than the opponent, Egypt scored three in a row after the first TTO, getting 9-8.

Abdelhay demolished Japanese defense with two aces in a row and one kill 15-11. Somehow, Japan equalized at 21-21, but Abdelhay was perfect, converting the first set ball into 25-23.

The Ishikawa – Abdehay duel continued in the third set, too. After 10-all, Japan managed to change the course of the match with four points in a row.

Unlike Egypt where Abdelhay didn’t have support by his teammates, Ishikawa was followed by Shimizu on the other side. So, the home team didn’t have problems to maintain a four-point lead until the end. It even enlarged it (25-18).

Egypt knew that it had only one more chance to avoid defeat. Someone had to join Abdelhay and it was Abou. The advantage of African side was constantly increasing (13-10, 15-11, 19-13…). Egypt has reached the tie-break 25-17!

Ishikawa was a key factor in Japan in the fifth set. He scored in series of two consecutive points, giving his team 4-1 and 7-2 lead. Even then, it was almost certain that Japanese team will start the tournament with a win, let alone when it had 10-2! Final result in the tie-break shows how Japan was dominant 15-7.

POL W: American opposite suspends her career due to mother’s illness