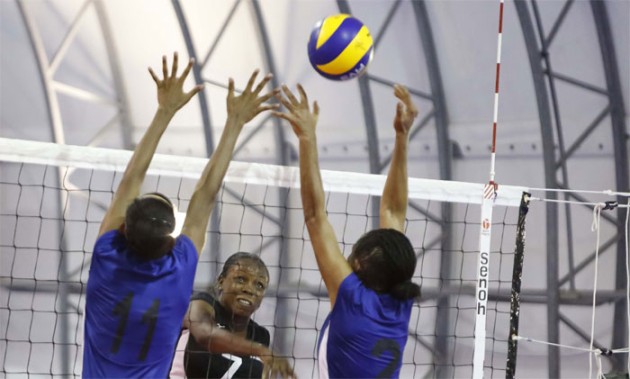 Veteran Brenda Allen Edinborough had a sterling performance in all departments to lead the team to victory with 20 points. These consisted of 9 spikes, 9 blocks and 2 service winners. Teammate Shanecia Dyer supported the winning cause with 13 points.

For Anguilla, Susan Webster had 12 points while Ludiane Leveret chipped in with 9 points.

For the coach of the St. Kitts & Nevis team, Steadroy Collins, it was the actions of his team that accounted for the victory. “From the beginning we came out ready for the challenge and most of our game came together. The blocking in particular I think frustrated them. Our serving was very good too we did not have as much errors and the setting improved over game 1. However it is not yet over since we might very well meet them in the finals again”, he intimated.

Captain Antoinette Henry was all smiles with the victory. “It is obvious that they came out hard at us and despite a slow start we were able to hold them off. We knew that they would go to Ludianne (Leveret) as the main hitter but our blockers were ready to stuff her best shots”, she said.

Coach Jason Liburd pointed to the poor passing of his team that led to the down fall. In this match we did not pass at all and I thought that poor passing was the underlying factor that contributed to the loss.

The Captain Khalidah Banks was obviously disappointed. “This is not a good feeling for me at all. We went into the game pretty confident and I don’t think we were tired physically maybe mentally as we got good rest during the day. So I can’t quite figure out the problem why weren’t passing properly”, she revealed.