The best server in Playoffs of Champions League is ready to #WoVChat with you!

Kim Yeon-Koung is one of the most charismatic female players in the world at the moment. When a player with this kind of appearance has incredible statistics on her side as well, she simply has to be called to join our Twitter interview! 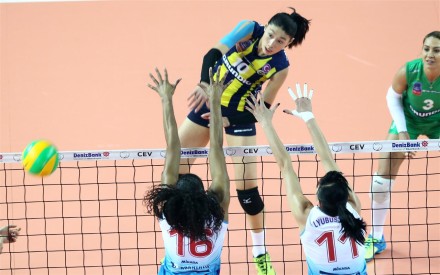 Korean receiver/outside hitter is the main attacking option of Fenerbahçe Grundig İstanbul in the CEV Champions League, while the strength of the team allows coach of ’Fener’, Marcello Abbondanza, to divide obligations in attack in the Turkish league to some other players. Thus, Kim does not carry a load that is too heavy in the domestic championship.

But, as we said, in the Champions League she was standing out in each game being the best scorer of Fenerbahçe so far with 197 points in 10 games (average of 19.7 points per game). By this, Kim is the second best scorer in the competition including all phases and in Playoffs phase, too (89 on 4 games, 22.25 points per game). In addition, Kim shares the first place among best servers in the Champions League (including all phases) with 18 aces (1.8 per game), but holds top spot in Playoffs phase (10 aces in 4 games, 2.5 per game). She is also the second best spiker in all phases and in the Plaoyffs phase.

To sum up – Kim Yeon-Koung is the main reason why Fenerbahçe managed to reach the Final Four of the CEV Champions League after 4 years without suffering a single defeat in campaign and why they are huge favorites to take the trophy in Montichiari.

My favor player Kim!!
She is the best player in the world. Maybe she was from another planet not Korea. Even I am Korean, I can’t believe that she is korean as me.
Go Kim! Go Fenerbahce!

I love Kim! I am your Chinese fans.Like your ambition! Looking forward to Rio games do you play! Will you come to China play game?

Dear 喻洋,
The interview with Kim Yeon-Koung will start on Monday, 13:00 (CET) and will last until 13:30 (CET). You will be able to ask this question to Kim only then and by using hashtag #WoVChat.
Thank you!

I wonder whether she will continue to play for Fenerbahce next season.

She will stay because Fenerbahce will give he lot of money like this years. The only other club who can give he that much is in Russia but now with problems there…or she will stay in Turkey but change club. She always says she likes Istanbul very much!