USA earned their first victory in Pool C showing a powerful team in the victory over Trinidad & Tobago by score of 3-0 (25-10, 25-10, 25-8) in the preliminary round of the NORCECA Women’s Junior Continental Championship. 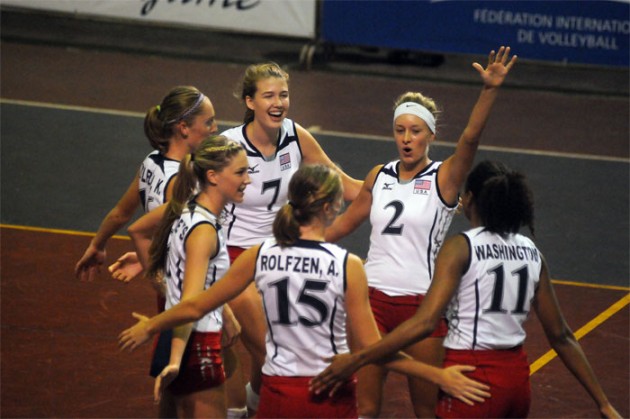 The Americans defeated CAZOVA champions with a tactical structure confirming their intentions to qualify for the FIVB 2013 World Championship.

Kadie Rolfzen was the best scorer for USA with 15 points, 3 of them aces and one in blocking. Makila York topped Trinidad & Tobago with 4 points.

USA’s captain, Kelsey Humphreys commented: “Our goal for this match was to keep our energy high and to keep focused in our performance, it was a team effort”. Her comments about their next opponent Cuba were: “Hopefully we can build up from this match.”

Makila York captain of Trinidad & Tobago said: “We had some difficulties in our passing and things didn’t go our way; we had some highs during the match and we’ll practice on them so they can be more frequent.”

Winning Coach Rodney Wilde said: “I felt it was important that all the players had the chance to play today, they haven’t done it together internationally. We haven’t seen Cuba yet so we don’t know what we’ll be facing.”

“First of all I want to say that we find ourselves in a very tough group” began saying Coach Ali Macsood. “I said to my girls that even with a miracle it’s impossible to beat USA and Cuba, so we’ll try our best and reach 15 points which didn’t happen today because our passing broke down as they have a very tactical team, I wish all the best for USA in this tournament.”

NED W: Slöetjes not sure if she’ll...