Volleyball is not as popular as football or basketball. In almost any aspect. Every volleyball fan knows that. Volleyball is a specific sport with different target market. Volleyball is a sport for families. In many countries volleyball is considered an amateur sport, despite players and staff get paid for their work. But there are also countries where some professional clubs invest big money. Three, four times higher than an average budget for the European club volleyball. 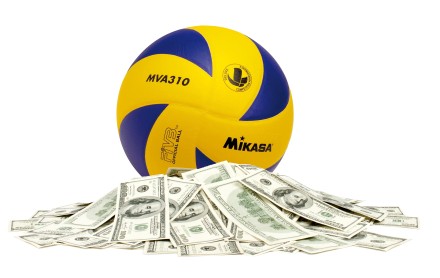 The strongest volleyball championships (at least until the last season, because in today’s club volleyball things change so quickly) were played in Russia, Italy and Poland for men and Russia, Turkey and Italy for women. And it is connected with the amount of the money invested in this sport. If we talk about the volleyball teams’ budgets, it depends on many things and vary from country to country. But top 10 pro volleyball teams in Europe invest around 3.000.000€ per year while some Russian teams arrive also little less than 5.000.000! This money includes all: players’ contracts, club’s daily expenses, maintenance of facilities, young selections, taxes, etc.

Many teams (like Zenit KAZAN RUS or VakifBank ISTANBUL TUR) have domestic and foreign volleyball superstars, but most volleyball teams spend big part of their budget on 2-3 high-quality and expensive players and with the rest of the team they try to compensate to fit into the programmed budget.

There is a rule in Japan (and not only) that each team can hire only one foreign professional volleyball player and other domestic players of the team are considered “employees of the company”. They work and play also. The most important item of the team’s budget is the expense they have for that foreign player.

Last year South Korea, after years of investing and bringing one foreign player per team and spending enormous money, have decided to introduce the volleyball “Salary Cap” where one team can spend maximum 300.000$ per foreign volleyball player. The players were chosen through the draft training camp.

Another thing what many volleyball teams do is they don’t have pre-defined budget for the season. They simply create funding campaigns at the beginning of the season trying to involve as much sponsors and fans as they can. They remaining part gets compensated by the main sponsor (generally the company who owns the team) or owner of the team.

Medium level volleyball teams (mostly from France, Greece, Germany, Poland…) stay around 1.5-2.000.000€ per season signing younger players. The other clubs (Spain, Romania, etc.) with international players try to cover expenses of the budget with less than 1.000.000€.

The general world economic crisis, constant reduction of the companies’ interest for volleyball and other aspects of the current period are making volleyball teams’ budgets lower every year. First thing company tries to cut is money for marketing and this money was generally intended to the club they were sponsoring. Let’s hope some changes about volleyball on international level will return the interest to people to get passion for volleyball again and afterwards bring more valuable sponsors to support volleyball clubs. Because, volleyball cannot exist without strong clubs and clubs’ competitions.