In one of near-flawless performances they have played so far in the one-week tournament, Vietnam received a great applause from a large crowd of home enthusiasts cheering them all the way inside the competing venue. 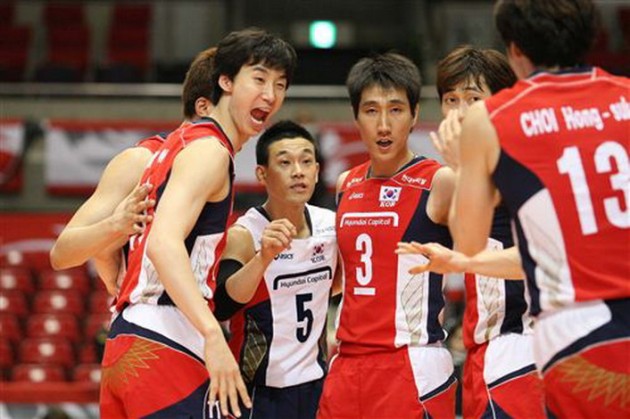 Taking the height advantage and better experience, South Korea, the FIVB world No.22 and the third at the last year’s Asian meet, overwhelmed the host nation with their superb form. With the 193cm Jeon Kwang-In and the 198cm Lee Kang-Won overcoming the smaller blockers with their spectacular cross-court spikes, the Koreans took the first two sets comfortably 25-21 25-17.

Cheered on lustily by local spectators, Vietnam came back much stronger in the third set. Both teams played aggressively neck and neck to fight for points which were never far apart from two.

At 23-23, Vietnam gained the upper hand to advance 24-23 and need only one more point to make amends in the other set. However, the Koreans attacked heavily to smash the Vietnam’s high hopes. From then, both teams involved in an exciting rally, taking turns to lead.
The Vietnamese saved five matchpoints before Jeon Kwang-In ended the hosts’ entire challenge with a thundering spike from mid-court. South Korea eventually beat Vietnam 31-29 to capture the heart-pounding close contest and the match.

Following two wins against one loss to Japan, the Koreans finished second in Pool A, while Vietnam came in third place of the pool with one win over Myanmar against two losses.

AVC M: Iran stretch their invincibility to three in a row

AVC M: Japan thrash Myanmar in straight sets for a perfect run in Pool A