Slovenia’s national teams started about one month ago their preparations for the upcoming European qualifiers, with the groups working intensively in Maribor. Today the capital city of Ljubljana played host to a press conference whereby the Federation disclosed the goals for the upcoming tournaments. 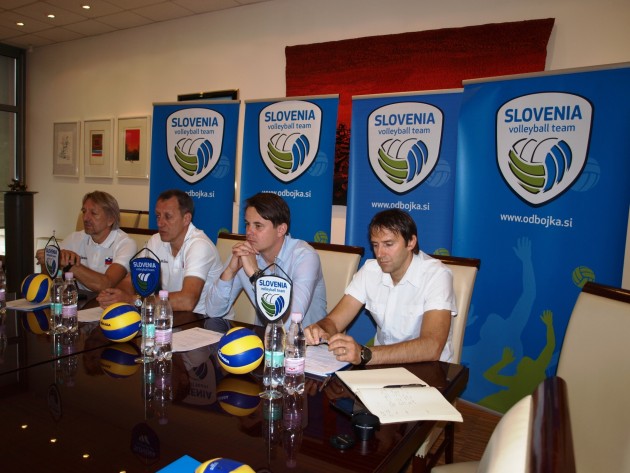 “Everything has gone according to plan until we were confronted with some injuries, so in the last preparatory matches I had to rest some players to save their energy” says the men’s head coach Veselin Vukovic. “The young players got some playing time and they responded well. So, even though Germany is clearly the strongest side in our group, followed by Ukraine, I still think that we can qualify for the final round of the European Championship. This would be of crucial importance for the current generation” adds Vukovic, who has – temporarily – changed his assistant, opting for Italian-born Mauro Puleo.

Slovenia will be playing this coming weekend Sweden, Germany and the hosts of Ukraine in Kharkiv, before a second round robin coming up one week later in Maribor.

The women’s national team is now mentored by Ukrainian Oleg Gorbachov. He moved to Slovenia some years ago and is a well-known coach in the national league. “About a year ago we decided to inject fresh blood in the national team and hence the group is mostly composed of young, but promising and talented girls. After five weeks of preparations and friendly matches I can say that we are ready for this challenge and we have our chances to qualify for the final round taking place next year in Germany and Switzerland” he says. Slovenia will start their campaign this coming weekend at “Lukna” sports hall in Maribor hosting France, Montenegro and Belgium before the second round is held in Kortrijk, Belgium, next week.