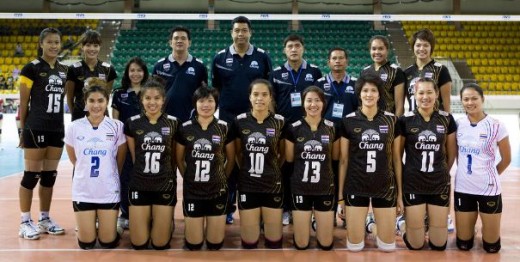 “After the London 2012 Olympic Games, we have made some changes to the team leaving just 5 players from that roster. This first match was a warm-up for us and now we are ready to meet Kazakhstan and Chinese Taipei (in the preliminary round),” coach Hong Sun-Jin said. “Kim (Yeon-Koung) suffered an injury and she is recovering, hopefully she will be back soon.”

In spite of the loss, Korean captain Han Song-Yi is optimistic about their next matches.

“We are satisfied with this game though we can do better and we will,” Han said.

Thailand coach and captain Wilavan Apinyapong showed a kind gesture to their opponent by praising them for giving them a good challenge will help them fortify their bid to win on their next matches.

“Korea played in high spirits that is why it was rather a tough game for us,” Apinyapong said.

“Playing with Korea was really thrilling,” coach Kiattipong added. “The game was useful for both teams to learn more about their abilities. Despite our victory, we shall pay more attention to the techniques used by our opponents and improve our skills for future matches.”