In conjunction with the European qualifier that took place this past weekend in Ostrava, the Czech Volleyball Federation organized the final stage of a nationwide mini Volleyball competition that was joined by more than 1,000 children. The final followed up the regional phase of the event in what is one of the largest Volleyball competitions in the country. 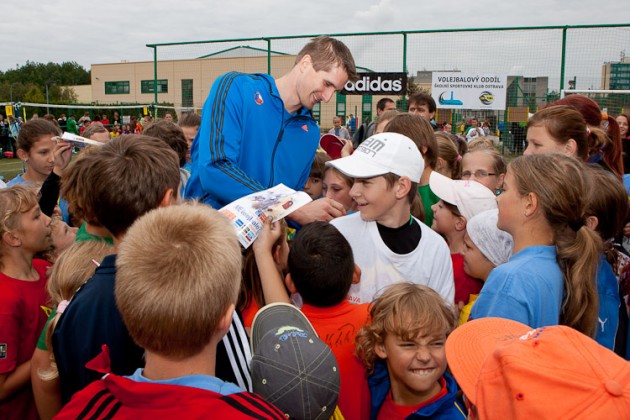 A total of 48 Volleyball courts were set up in the campus of the local university in Ostrava; as per their age, the kids were assigned to different categories, with the youngest playing in yellow jerseys and just enjoying some easy drills with the ball, while those dressed in red played some basic Volleyball. Moving up with their age, the children wearing green t-shirts played with the format of 3 vs. 3 while those in blue played according to the ordinary rules of the game.

56 teams joined the girls’ competition while 24 got the right to compete in the boys’ division.

All players were accommodated in the premises of the Technical University of Ostrava and in case of rain two indoor halls were ready to host their matches.

On Sunday the program of the competition was briefly stopped as the kids enjoyed the visit of the players of the Czech national team, who went around distributing smiles, small presents and autographs. The children enjoyed the opportunity to see their t-shirts signed by their heroes, including stellar opposite Jan Stokr (see picture).

EC M: Belgium to get last call in May