SUI W: Volero to focus on long-term development of its young group

Volero ZÜRICH will play away match against Vakifbank ISTANBUL in the 2013 CEV Volleyball Champions League. The club had some major changes – affecting the roster as well as the coaching staff, and they have many young players without experience. Read latest volleyball news on Worldofvolley.com. 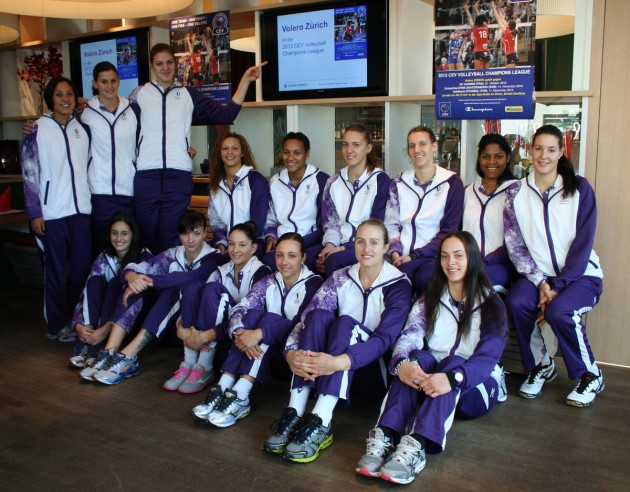 After some major changes – affecting the roster as well as the coaching staff – the club had somehow to re-adjust its goals for the coming European adventure.

Volero started out pretty well in the national league and currently tops the charts after six rounds of play. However, the desired quality and consistency is not yet there. Head coach Dragutin Baltic still has one more week to get ready for that difficult debut against Vakifbank. “I do not limit my actions to the next seven days, as our campaign will last for at least a couple of months” said Baltic while attending a press conference hosted in the splendid “Volero Lounge”. “We have many young players without experience at this level, so for me it is important to develop a team throughout the season, also for the future!”
The start of the 2013 CEV Volleyball Champions League comes very early this year and some of the clubs haven’t started yet their respective domestic season. “It was very helpful that we could already play six rounds to get to know each other. I am also very satisfied with the way the team is working especially as we practice for the start of the European Cups”.

The Slovenian coach will also count very much on the Cuban world-class player Nancy Carrillo de la Paz that initially should have been standing on the court of one of Volero’s opponents. Carrillo originally had a contract with Uralochka-NTMK EKATERINBURG for the upcoming season. But unfortunately the license approval didn’t work as expected so she returned back to Zurich in September. “After the rebuilding of our team and the change in the coaching staff we are now happy to have Nancy with us. She is able to help our young team to perform as required by the CEV Volleyball Champions League” Volero’s president Stav Jacobi explains. But besides Carrillo three other players with good experience from the past two CL campaigns are still there, namely Nadja Ninkovic (SRB), Nneka Onyejekwe (ROU) and Nina Rosic (SRB), so they will have to assume a lot of responsibility. “We need more time to develop as a team”, the team captain Nneka Onyejekwe said at the press conference in Zurich. “If we catch a good start, we can bring it home”.

“I’m very happy with the results of the DOL; we will meet great teams but we can also show very attractive Volleyball in our home town”, Stav Jacobi said. “With our young and new team we don’t have to have any expectations and we can play without any pressure! But for sure to survive in this strong group will be very hard!”
“Vakifbank is the clear-cut favorite in our pool because they have 12 very good players in their roster”, head coach Dragutin Baltic confirmed. “We will try to keep it up with Uralochka and RC CANNES and I expect that we can claim at least a win against one of these teams”.
Stav Jacobi is particularly looking forward to playing Uralochka-NTMK EKATERINBURG as well as RC CANNES: “Many former players of Volero are currently representing these sides and additionally we will finally meet the world’s most famous Volleyball coach and mentor Nikolay Karpol. We have been talking with him about this opportunity for 10 years. In 2003 he helped us develop our club and reach the European level. Finally we will meet each other in the 2013 CEV Volleyball Champions League!”

To entertain the spectators at the games Volero ZÜRICH booked a live band that will perform famous disco, soul and funk songs before and after the games as well as during the time-outs and set breaks to animate the local Volleyball fans. The sports gym Im Birch will be turned into a real Volleyball arena for these events with additional tribunes, music stage and an increased VIP-zone.

GER M: DRESDNER SC feels feisty and wants to make it to the top