WCC W: Rabita Baku to defend the crown in Qatar 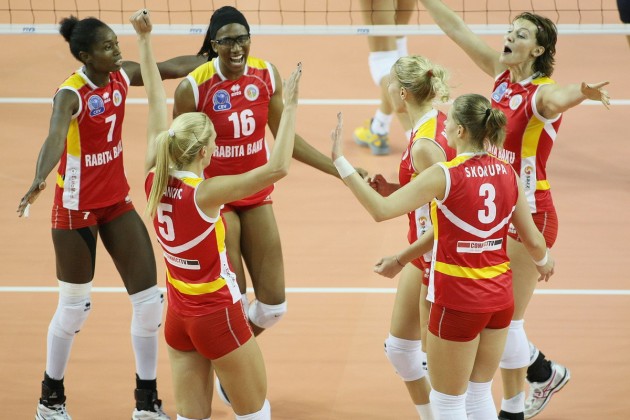 The team based in Azerbaijan built a 12-5 advantage in blocks led by Foluke Akinradewo and Natasa Krsmanovic who totaled 4 and 3 respectively.

Fenerbahce’s Tokatlioglu. Pequeno gave Fenerbahce a one-point margin at 14-13 but Rabita was in front 16-15 at the second TTO with the spike by Krsmanovic. Montaño and Foluke Akinradewo scored via consecutive blocks. Akinradewo then blocked Pequeno stretching the gap to 19-15. After a time-out of Fenerbahce, Pequeno and Foluke traded kills. Hubner-Grun extended the difference to 21-16. Two more points by Akinradewo set the table for a monster kill by Montaño. Rabita Baku took the set 25-18.

Rabita Baku led 8-5 at the first stop of the second set. Pequeno and Tokatlioglu kept Fenerbahce close but the parallel spike of Montaño gave Rabita a lift at 16-14. Some unforced errors from both sides kept the score without changes with Montaño providing breathing room to Rabita.  At 21-18, Okuniewska blocked Rabadzhieva but Montaño stepped in again for her side. Montaño scored for set-point at 24-20 and all finished in the next play.

It was 8-4 in favor of Rabita Baku at the first technical time out of the third set as Foluke scored her fourth block of the match this time against Pequeno. Fenerbahce called for time-out at 14-9 when Montaño scored with a running-spike following a smart tip by Hubner-Grun. Eda Erdem landed her attack for the Turkish club but Pequeno was blocked by Rabadzhieva, who then killed for 16-10. Pequeno and Steinbrecher blocked twice to close the score 16-12. The defensive wall of Rabita continued to create problems to Fenerbahce as the difference widened to 22-14. Two consecutive unforced errors forced a time-out of Rabita but Montaño came back with two spikes for match-point at 24-16 and Rabita advanced to the finals with a 25-16 score.