Host China captured the first finals slot at the 2012 Asian Youth Girls’ Championship of Friday, with a 3-0 win against Chinese Taipei at the Shuangliu Sports Center. Chen Tzuya, Hu Mingyuan, Lin Lin, Yuan Xinyue and Wang Yunlu were the best in the game. 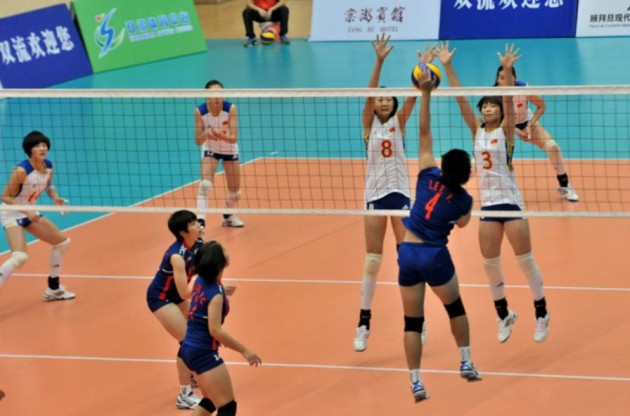 China stormed to an easy 8-3 lead as their opponents could not properly position themselves for reception. Their taller lineup also enjoyed the advantage at the net, easily anticipating and deflecting Chinese Taipei’s attacks.

Chen Tzuya of Chinese Taipei took a stand at the left wing but her attacks could not penetrate the Chinese blockers’ stance. Meanwhile, Hu Mingyuan was unstoppable with her attacks once she slid to the right side, to gain the first set for China.

Chinese Taipei vastly improved on defence with several timely digs during the second set. They also braved the fierce attacks and posted blocks. Later, the Chinese Taipei servers suffered from errors, while China capitalised on aces scored by Lin Lin.

Later during the second set, China surged further with their left wing spikes and middle attacks. The Chinese side made it clear that once Yuan Xinyue took the first step, there was no stopping her kills down the middle. Wang Yunlu was also a major threat at the left side.

In the final set, Chinese Taipei failed in their effort to outshine the opponents’ attacks, and mostly scored off the other team’s errors.

Yuan Xinyue scored a total of 16 points in the match, while Wang Yunlu harvested 18 more for the host country.

China will play against the defending champions Japan in the final.