CL W: RC CANNES back on track after cruising to straight win in Zurich 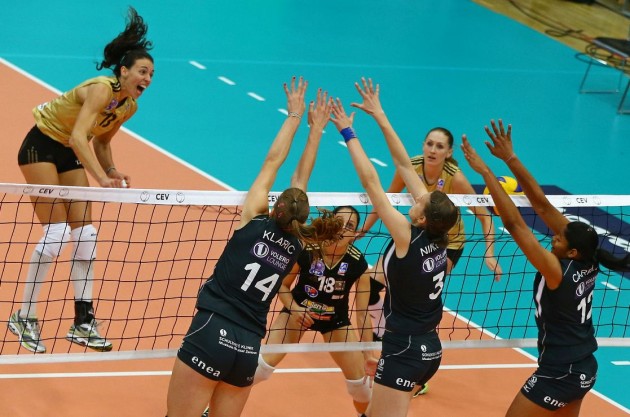 Volero had lost last week in straight sets to Vakifbank but tonight started well going up 8:4 and staying tuned up to the second mandatory stop. Cuban spiker Nancy Carrillo performed well and she contributed seven points all alone to the count of Volero. However, after the mid of the set, RC CANNES sped up their pace while Volero started making some errors eventually losing that section of the game with the score of 22-25.

Inspired by their captain Victoria Ravva RC CANNES got up 4:1 and 8:5 in the second set while Volero setter Naoko Hashimoto found it difficult to anchor her spikers, even Carrillo. Head coach Dragutin Baltic opted for some substitutions with Kristel Marbach, Katie Carter and Karla Klaric that all joined the game for Volero. RC CANNES stretched the lead to 16:8 but Volero fought its way back to 20:17; that was all for the home side as Brankica Mihajlovic anchored RC CANNES to the final 25-19.

With Klaric and Carrillo on fire, Volero opened quite strong in set 3 (8:5) and remained to the front with a margin of two or three points until RC CANNES drew level at 18 all. RC CANNES got up 21:18 and after another short run by Volero, the guests could close the match via a serving error committed by Volero’s team captain Nneka Onyejekwe.

Top scorers of the match were Nancy Carrillo with 18 points for Volero and Nadia Centoni with 20 for RC CANNES.

“We did not play well and we still have a lot to learn” said Volero captain Onyejekwe.

“After the defeat we suffered last week it was a tough match for us but still very important to end up with a win” added RC CANNES leader Victoria Ravva. “Volero is a young team but with great potential. Our experience did help us a lot bring it home in straight sets and I am sure the outcome would have been different if Volero had won the third set”.